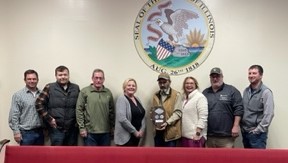 There were a lot of new faces sitting around the table at the White County Board meeting on Tuesday night and fairly large agenda to tackle. First order of business, Cassie Pigg was appointed to be the new White County Board chairman and Ken Usery was appointed as the new Vice Chairman. The board then heard reports from County Officers. The new County Clerk, Kayci Heil reported that CWC School Board petitions are being turned in.  Incoming Treasurer Michael Baxley gave an in depth report financial report and said they are gathering information for the upcoming audit taking place after the first of the year. Baxley reported that for the 2021 property tax cycle, $16,604,524 was collected. He noted that the property tax delinquent notices have been compiled and sent to tax payers. Lastly, he told the board that the Tax Sale will be held January 25th, 2023 and tax payments must be made by January 24th to avoid their taxes going to tax sale. Also, to avoid the taxpayers names being printed in the McLeansboro Gazette, taxes must be paid by December 30th 2022.

Gary Baxley gave a report that in the Supervisor of Assessments office, things are an absolute mess. We’ll have more on that situation tomorrow.

White County Coroner Chris Marsh told the board that he is in need of a Forensic Pathologist. The individual who has been doing them is no longer available. Marsh said for the time being he is taking the deceased to Champaign County.

Circuit Clerk Kelly Fulkerson told the board that all paper files have been scanned into computer and are now available digitally.  Fulkerson says those paper files will now be disposed of and all filing cabinets will be removed from the third floor of the courthouse.

Judge T Scott Webb informed the board the county needs to hire a Public Defender. Due to the Safe-T Act beginning in January, court cases are expected to increase. Current Public Defenders Brian Shinkle and Rhonda Blades have both accepted positions elsewhere. The board approved Webb to hire a new Public Defender and to amend his budget to do so.

New Sheriff Jordan Weiss introduced the newest Deputy in the White County Sheriff’s Department. Weiss welcomed Trey Simmons and said he will begin his first shift this (Wednesday) morning. He also announced the upcoming retirement of Sheila Headlee and Wayne McKenzie from the department at the end of December. Both Headlee and McKenzie addressed the board and the visitors with many thanks for all their support throughout the many years that they have been with Sheriff’s Department.

Following department reports, the board appointed Amanda Cannon to the Egyptian Health Department board. The board is looking to appoint someone to the IllinoiSouth Tourism Board but at this time it was tabled until next meeting.

Standing in for Doug Anderson of the White County Farm Bureau, Bryce Williams, Brandon Barbre and Ryan Williams presented a plaque to the County Board.

Stephen Sork was appointed to the Mud Creek District for a term ending in September of 2025, and Doug Winter was appointed to the Randolph District No.1 for a term ending in September of 2025 as well. The board approved Kayci Heil as the IMRF agent as well as admin for Quickbooks.  The board then approved Kayci Heil to the position of Clerk and Recorder, Jordan Weiss as White County Sheriff, Michael Baxley as White County Treasurer and Gary Baxley as Supervisor of Assessments. The board approved the renewal of Mutual Medical Health Insurance Policy after a discussion with Insurance Rep Jeremy Billington.  Unfreezing ARPA funds for the renovation of the of Carmi Times Building was approved along with the a salary increase for the Secretary of the County Board.

The board approved the removal of Pam Armstrong, Brittany McDonald and Beth Sell from all Banterra Bank accounts as well as the removal of Pam Armstrong, Beth Sell, Brittany McDonald and Dusty James from all accounts at Mid First Bank and Trust. Staci Huffer, Teresa Knasel, Lacey Stubblefield, Michael Baxley, Brandi Rawlinson and Shannon Johnson were all approved to be added to the Banterra Bank accounts as well as Shannon Johnson, Brandie Rawlinson, Michael Baxley, Lacey Stubblefield, Teresa Knasel and Staci Huffer added to the accounts at First Mid Bank and Trust.

The board also approved the renewal and dues for the Illinois Animal Control Association. Before closing, Ken Usery discussed with the board that they have run into a small problem with the renovation of the Carmi Times building. The Bedford stone on the front of the building will now have to be removed due to it pulling away from the cinder block. The cost to fix it will be around $57,000. No decision was made during the meeting.

There was no executive session. The next meeting of the White County Board will be January 11th at 7:00 p.m.