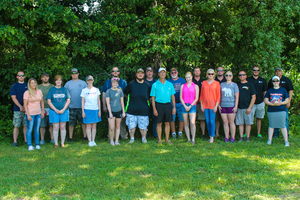 This year’s event had one competition, a “Speed Steel” event, where shooters had to work their way through six different stations, with five steel targets each. Individuals shot five relays at each station for a total of 150 targets shot. Time was kept for each relay with the slowest relay time at each station being dropped. All remaining times were added. The lowest overall time won the competition.

All of the shooters were given one ticket for the grand prize drawing of a Ruger Mark IV target pistol. The top three shooters in each division were given extra chances. Jason Kosikowski of Carmi, IL was the winner of the pistol. The pistol was donated byThe Gun Room at Indian Creek RV in Norris City.

Proceeds from the Young Leader Pistol Shoot will support the annual Young Leader Collegiate Scholarship. Proceeds above the 2021 scholarship amount will be donated to a local food pantry.