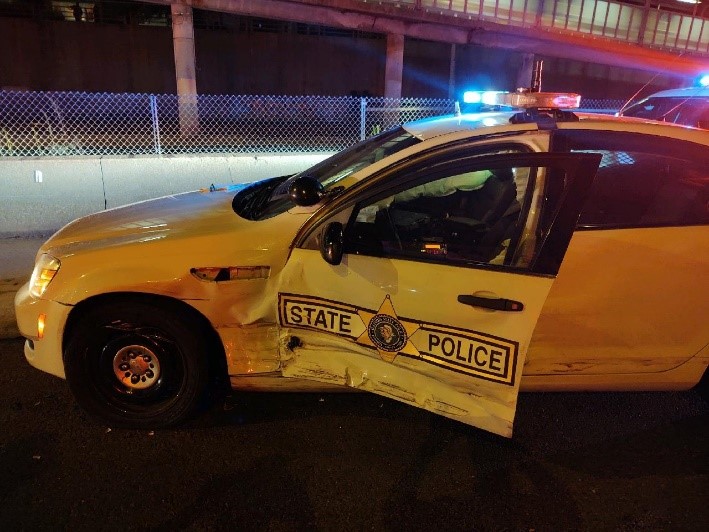 On Sept. 16, 2020, at approximately 1:24 p.m., an ISP Trooper was blocking traffic for a commercial motor vehicle stalled ahead in the left lane on Interstate 55 northbound at milepost 257.5 (south of US Route 30) in Will County. The Trooper was seated inside of his fully marked stationary squad car with
the emergency lights activated, when it was struck by a 2003 white Toyota pickup truck. The pickup truck vehicle failed to yield to the authorized emergency vehicle and struck the rear of the Trooper’s squad car. The third vehicle, a 2016 white Ford Econoline Van, traveling in the same location then struck both the pickup truck and the squad car. This impact then caused the squad car to be pushed into the left concrete median barrier before it came to rest in the left lane. The Ford van came to rest in the right ditch. The driver’s side of the squad car was then struck by a forth vehicle, a 2011 Blue Subaru SUV, as it attempted to avoid the crash. The Trooper sustained serious, but non-life-threatening, injuries and was airlifted by helicopter to a local area hospital. The driver(s) of the Toyota pickup truck (serious injuries) and the Ford van (non-lifethreatening injuries) were also transported to local area hospitals. The driver of the Toyota pickup truck, Alexis Magallanes, 19-year-old male of Berwyn, Illinois, was cited for a violation of the Move Over (Scott’s) Law, as well as the failure to reduce speed to avoid an accident. 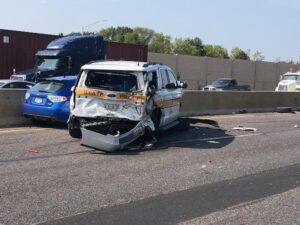 On Sept. 17, 2020, at approximately 12:37 a.m., ISP District Chicago units and IDOT units were on the scene providing traffic control for a traffic crash that occurred on Interstate 290 eastbound at Austin Boulevard. While investigating the initial crash, a 2009 maroon Acura drove through the crash scene at a high rate of speed and failed to yield right of way to the stationary emergency vehicles. The passenger side of the maroon Acura struck the driver’s side of the ISP squad car and the IDOT truck. The maroon Acura also struck multiple vehicles and three pedestrians, one of which was an IDOT maintenance truck operator. The impact from the crash with the IDOT vehicle caused the vehicle to strike the IDOT operator who was standing on the roadway at the time of the crash. The driver of the maroon Acura, Terrance K. Barber, a 33-year-old male of Chicago, IL, fled the scene of the crash on foot and was apprehended a short time later. The operator of the IDOT maintenance truck, a
46-year-old male, was transported to a local area hospital with serious, but non-life-threatening, injuries. Barber was transported to a local area hospital with minor injuries and later released. Barber was arrested and charged with aggravated driving under the influence, leaving the scene of a personal injury crash, failure to give information/render aid, driving while license suspended, failure to reduce speed to avoid an accident, operating an uninsured motor vehicle, improper lane usage, improper passing of an emergency vehicle, improper passing of an emergency vehicle causing injury to another, and improper passing of an emergency vehicle causing property damage to another. 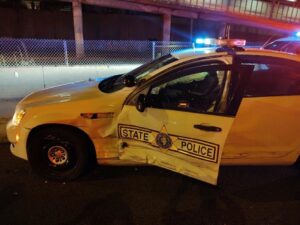 “Our officers protect and assist the people of Illinois every day, just like these Troopers and IDOT worker were doing when these crashes occurred,” said ISP Director Brendan F. Kelly. “We will continue to pursue these offenders, but it hasn’t even been a week since I last stood by a trooper’s hospital bedside. And now
we have two Move Over (Scott’s Law) crashes that occurred within less than a 12-hour period. I am relieved these troopers and IDOT worker were not killed, but I am sick and tired of our troopers getting hurt for doing their jobs because some people just don’t care. Everyone should pause and think for a moment about these selfless men and women, first responders and highway maintainers because they think
about you and your safety every day.”

“Our workers are first responders who put their lives on the line making our highways safer and keeping the public out of harm’s way. At the end of the day, they want to get home safely just like everybody else,” said Acting Illinois Transportation Secretary Omer Osman. “These types of incidents are entirely
avoidable if drivers practice basic common sense. Slow down when approaching first responders and work zones. Give them distance. Put down the phone. Don’t drive if you’re impaired. You could save a life – including your own.”

The ISP would like to remind the public of the requirements of the “Move Over” (Scott’s) Law, when approaching an emergency vehicle, or any vehicle with their hazard lights activated, drivers are required to slow down, and move over and change lanes if possible. In all cases drivers should proceed with due caution. The minimum fine for a violation is $250. A second or subsequent violation of this offense ranges from $750 to $10,000.