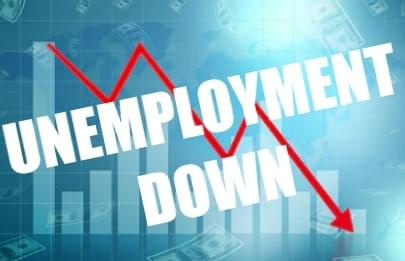 SPRINGFIELD – The Illinois Department of Employment Security (IDES) announced today that the unemployment rate decreased -0.3 percentage point to 7.4 percent, while nonfarm payrolls were up +21,100 jobs in February, based on preliminary data provided by the U.S. Bureau of Labor Statistics (BLS) and released by IDES. The January monthly change in payrolls was revised from the preliminary report, rising from +9,700 to +23,200 jobs. The January unemployment rate was unchanged from the preliminary report, remaining at 7.7 percent.

In February, the three industry sectors with the largest over-the-month gains in employment were: Leisure and Hospitality (+32,300), Trade, Transportation and Utilities (+2,400) and Information (+700). The industry sectors that reported the largest monthly payroll declines were: Construction (-5,600), Professional and Business Services (-4,500) and Government (-2,200).

“IDES and the Pritzker administration remain committed to supporting claimants and families with the services they need as the state moves toward a full reopening and the economy begins to recover from the COVID-19 pandemic,” said Deputy Governor Dan Hynes.  “IDES continues to serve an unprecedented number of claimants while working on process improvements that make navigating unemployment and job-seeking services as easy as possible.”

“Under Governor Pritzker’s leadership, Illinois has prioritized a safe and measured reopening of our state – with data driven metrics updated on an ongoing basis to continue bringing people back into the workforce,” said Sylvia Garcia, Acting Director of the Department of Commerce and Economic Opportunity (DCEO). “The latest unemployment data demonstrates Illinois is poised to continue making progress in returning key industries, supporting workers, and restoring our economy.”

Compared to a year ago, nonfarm payroll employment decreased by -461,200 jobs, with losses across all major industries. The industry groups with the largest jobs decreases were: Leisure and Hospitality (-185,700), Educational and Health Services (-62,900) and Government (-54,100). Illinois nonfarm payrolls were down -7.5 percent over-the-year as compared to the nation’s -6.2 percent over-the-year decline in February.

The number of unemployed workers fell from the prior month, a -4.0 percent decrease to 454,200, and was up +100.6 percent over the same month for the prior year. The labor force was down -0.1 percent over-the-month and down -3.4 percent over-the-year. The unemployment rate identifies those individuals who are out of work and seeking employment. An individual who exhausts or is ineligible for benefits is still reflected in the unemployment rate if they actively seek work.

About the Department of Employment Security

The Illinois Department of Employment Security (IDES) provides vital employment services to Illinois workers, employers, and job seekers with resources including Job Fairs and Illinois Job Link, analyzes and disseminates actionable Labor Market Information, and administers the Unemployment Insurance Program.  To see the full range of services provided by IDES, and for the latest news concerning the department, visit IDES.Illinois.gov.