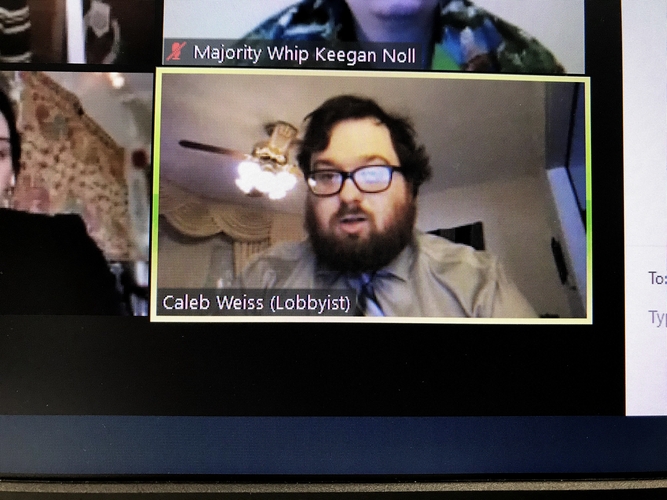 MIG is a legislative simulation and moot court with students filling roles as legislator, lobbyist, journalist, attorney, judge and party positions of committee and leadership.

Due to COVID-19 students from colleges and universities from across the state met and debated legislation via Zoom instead of the House and Senate chambers in Springfield.

While the format was changed, the results were largely the same for the SIC team, who secured their 12th State Title in 17 years.

In doing so the team largely rewrote the record book.

“The performance of this group was simply exceptional. I had high expectations entering competition and they surpassed each and every one of them,” said SIC advisor and political science instructor Matt Lees.

Returning delegates include Head Delegate Gillian Jones and Callie Oxford of Harrisburg, Jacob Lemon and Kaleb Schutt both of Golconda, and Caleb Weiss of Carmi.

First year delegates include Joshua Baker and Alex O’Daniel both of Carmi, Aleece McLeod of Shawneetown, Christian Murray of Harrisburg, and Gavyn Woolard of West Frankfort.

First year delegate Joshua Baker crafted his own original legislation, and successfully guided it from committee all the way to the Governor’s desk where it was signed into law. The bill was entitled “Keep Illinois Families Together Act.”

Baker’s bill was inspired by his mother who was deported by authorities when he was just four years old after her immigration status was exposed by an immigration attorney hired to help her obtain citizenship. “I wrote my bill to ensure that other families do not have to face what my family endured,” said Baker. “Josh has poured his heart and soul into this bill” said Lees, “he worked for months crafting this legislation.”

Senior Delegate Caleb Weiss played the role of lobbyist and helped to pass Baker’s bill through both chambers. He later won the Robert Kent Award for being the top lobbyist at the simulation.

Weiss added, “I am proud of our delegation. Meeting and working with all sorts of new people from around the state was also a rewarding experience.”

First Year delegate Aleece McLeod played the role of a legislator and Assistant House Majority Leader, while another freshman, Gavyn Woolard was elected Spokesperson of his committee and Assistant Senate Majority Leader. Both were later named Outstanding First Year Delegates of their chambers for their efforts. “I have never done anything related politics before this,” said McLeod, “now I wouldn’t trade this experience for the world.”

All of this was accomplished on the institution’s 20th Anniversary of Competition.

“I couldn’t think of a better way to commemorate our anniversary,” said Lees

“What makes this year even more special is that every single member contributed.”