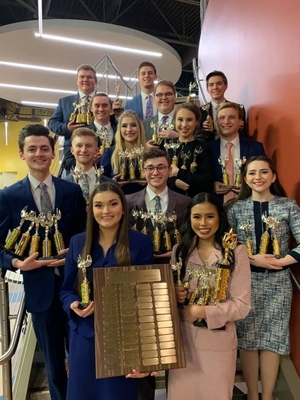 The Falcons also earned the George Armstrong traveling perpetual sweepstakes award for cumulative success over time. SIC is only the second community college to ever receive this prestigious award, which began in 1993.

Tucker Murphy, Bradley Frailey, Jacob Rice, Billy Lewis, and Jasmine Teston also received open finals awards, which means they placed among the top 6 overall competitors from any college or university in the state.

“Our team has invested literally hundreds of hours in their events and in their teammates’ events,” noted Director of Forensics Jenny Billman. “To perform well in a deeply talented state means a lot to us.”

In one of the last events of the season, the team will hold a public performance Thursday, April 2, at 7 p.m. in the George T. Dennis Visual and Performing Arts Center on SIC’s Harrisburg campus. Tickets are a minimum donation of $5 and will support the team traveling to the Phi Rho Pi National Tournament in Albuquerque, New Mexico. Tickets can be purchased directly from team members or at the door.

Individual results from the tournament are as follows. Awards are in the two-year division unless otherwise noted. The team is coached by Jenny Billman, Dr. Tyler Billman, and Paul Cummins.