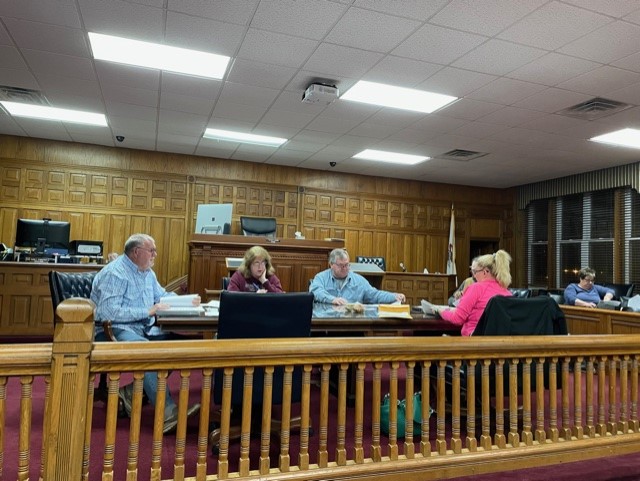 The White County Board held it’s second day meeting of the year fulfilling requirements.  Jc Tinsley was there for WROY/WRUL News and has details.

That’s the voice of Kathy Sands.  She says 3,215 registered voters participated in the primary.  She says of that, the machines tallied a total of 803 overvotes.

Sands said those people with overvotes didn’t get a chance to correct their ballot.  It appears only one race could potentially have been affected.

In that County Board District 2 race on the Republican side, Amanda Cannon topped Adam Sexton 260 to 239 votes with 51 cards thrown out due to overvote.  County Clerk Beth Sell says

In other news from the County Board meeting, Ron McAnulty and Cassie Pigg were absent leaving chairman Clint Spencer, Jakie Carter, and Ken Usery to handle business.  They heard updates from County Officers including Sheriff Randy Graves who says Deputy Capeheart resigned to take a job as the Gallatin County School Resource Officer.  He’s rehired Mikey Brown from Grayville and the county’s top law man says he’s in need of dispatchers.  Ambulance Director Adam Allen says his department has taken 79 calls in the last week including more than 30 in the past two days.  Highway Department head Brian Ray reports his crew is finishing up oil and chipping and they’re having issues with an ’07 International.  Additionally, Ray says the solar company wants to do half of the road repairs this year and half next year to allow some of the bridge work to settle before moving forward.  Ray says he’s also in talks with Ameren officials.  He wants them to make about $450,000 worth of repairs to roads in the Centerville area.

The Board accepted a bid for a resurfacing project that will improve Sycamore, some of Colony West, Brownsville School Road, and a portion of Pony Farm Road.  It’s a Carmi Township and County Board join project that will utilize about $200,000 of Motor Fuel Tax Funds with the remainder coming from the township.

Jail administrator Sheila Headlee also reported to the board that her facility recently passed it’s state jail inspection with a 100%.

Board members also voted to freeze spending of American Rescue Plan (ARPA) funds until they “get the [former Carmi] Times building going”.

Sheriff candidate Jordan Weiss later in the meeting asked board members to consider spending some of those ARPA funds ($30,000) on the administration offices at the jail/sheriff’s office.  He says with the Carmi Police Department now out of the building, they’re finding now would be a good time to make some overdue repairs and give it a fresh face.  That item was tabled for now.

The board adjourned just before 9:30am.  The next meeting will be held on October 11th at 7pm from White County Courthouse, Courtroom A.