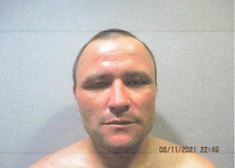 Carmi Police arrested 32 year old Shiloh Walden Saturday afternoon.  Officers say they attempted to stop the green GMC truck he was driving in the area of 8th and H Street around 1:30pm.  It appears Walden was considering fleeing at least as he continued driving onto Smith Street and then eventually turned northbound onto 6th Street before stopping near 706 6th Street.  Walden was cuffed and charged with fleeing along with 2 White County warrants.  Police also say they found a pipe in the vehicle with suspected meth residue.  In all, Walden picked up 6 charges.  The two warrants date back to December; a Criminal Damage to Property charge that allegedly happened on New Year’s Eve and a Domestic Battery charge committed December 11th.  New charges include Unlawful Use of Property, Possession of Meth, Possession of Drug Paraphernalia, and Attempting to Elude Police.  Walden is due in court Monday.