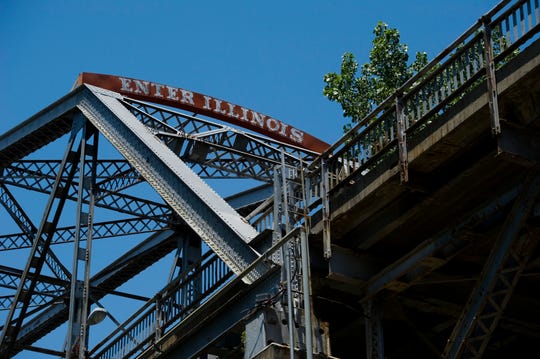 Phase One of the New Harmony Bridge Authority’s study is set to move forward.  That confirmed after late last week’s meetings of both the White and Posey County factions of the bi-state bridge partnership.  At Thursday’s White County meeting, it was announced that 6 qualified vendors submitted bids for the Phase One Bridge Study.  Wes Jennings won the contract with a max price of $150,000.  The next day, the Indiana group convened and agreed, along with stepping up to pay the cost of that study.  The state of Indiana pledged $350,000 of “seed funding” back in January.  The temporary fencing was also signed off on with O’Daniel’s winning the contract at a price of $4,885.  Funding from Illinois has yet to come through and the White County Bridge Commission has about $8,000 left before it’s coffers run dry.  Ellen Schanzle-Haskins, who has worked on other bridge projects throughout the state of Illinois explains the first phase and what comes next.

“The first phase is designed to see how the bridge structure is doing right now and to make sure it’s viable to restore it.  So, it’s a first step.  If for some reason, it’s found to not be viable, the next phases just won’t come.  They have to do a lot of calculating and look at the as built plans.  What that means is the bridge and all the repairs that have been made over the years, they have to assess all those and they have to do road ratings and you know, they have to do a lot of preliminary things.  We expect to have some information about the viability, probably we think by July.”

Members of the New Harmony Bridge Authority representing White County include Spud Egbert, the lone remaining member of the White County Bridge Commission; Sara Brown, who lives in White County and operates a business in New Harmony; Schanzle-Haskins who resides in Sangamon County but has roots in White County and brings a wealth of knowledge.  Schanzle-Haskins spent nearly 2 decades as a prosecutor for the Illinois Attorney General and was the lead counsel for IDOT from 2003 to 2013 during which time she was heavily involved in bridge related construction and reopening of the MLK Bridge in St. Louis, the McKinley Bridge, and also helped oversee the construction of the Stan Musial Bridge.  Brown, Egbert and Schanzle-Haskins were Governor appointees to the commission.  In addition, they’re joined by Clint Spencer, the White County Board representative, and also Linda Henning, appointed by her son Eric, the mayor of Phillipstown.