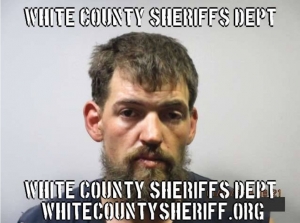 Joshua Deen McPherson, 34, of Carmi, is behind bars in the White County Jail following his Monday morning arrest by the White County Sheriff’s Department. Officers were dispatched to a motor vehicle in a field on County Road 1200N southwest of Wesley Chapel in Enfield. Upon arrival, Officers found a black Ford F150 pickup truck pulling a loaded trailer in a ditch on the north side of the road. The truck was still running and was stuck in the ditch. Passed out in the driver’s seat was McPherson. Officers were able to get him awake but he seemed to be very disoriented. Mcpherson was asked to step out of the vehicle and upon doing so, Officers found in the driver’s seat an apparent pipe used for smoking drugs. McPherson said the pipe was not his and that he didn’t think anything else illegal was in the vehicle. He told Officers he had just gotten his truck back from his brother. A quick search of the vehicle revealed a small plastic bag with a gray substance inside with what appeared to be a broken pipe inside. The pipe and the baggie both tested positive for methamphetamine. McPherson was arrested and taken to the White County Jail on charges of Possession of Methamphetamine and Possession of Drug Paraphernalia. He is being held without bond.