In what was the most anticipated matchup of the 2022 season in the Black Diamond Conference, the Johnston City Indians defeated the Carmi-White County Bulldogs 37-28 to win their third consecutive BDC championship.

A battle between two undefeated, top-10 ranked teams, came down to the final minutes.

The game could not have started worse for the Bulldogs. After a three-and-out, CWC was set to punt the football away when the long snap sailed over the head of punter Mitchel Edwards. Edwards was able to prevent a safety and run it out to the CWC 2 yard line, but it would set up first and goal for the Indians at that spot. Two plays later, Isaiah Watson would find the endzone and Johnston City led 7-0 just 3 minutes into the contest.

On the ensuing possession, the Bulldogs finally woke up. Carmi took the ball 66 yards in 6 plays, capping it off with a 5-yard touchdown run by Draxtyn Aud to put the Bulldogs on the board. CWC did not convert the 2-point play, the Indians still led 7-6 with 5:14 to go in the first quarter.

Nolan Causey ran back the ensuing kickoff all the way inside the Bulldog 40 yard line, but it would be called back due to a holding penalty against the Indians. 3 plays later, Causey would cough up the football and the Bulldogs would recover. However, the officials then changed the ruling, saying Causey was down by contact. Johnston City would punt the ball away and the Bulldogs set up shop at their own 25 yard line.

15 plays and 75 yards later, the Bulldogs took their first lead on another touchdown run by Aud, this one from four yards out. Aud ran in the two-point play and the Bulldogs led 14-7 with 7:47 to go in the 2nd quarter.

On the very next play, the Indians would cough it up again and the Bulldogs recovered, and this time it was a legitimate recovery. The Bulldogs took over at the JC 18 yard line, and Isaac King would take it into the endzone on the very next play. All of the sudden, the Bulldogs had scored 22 unanswered points to take a 22-7 lead with 7:24 to play in the 2nd.

The Indians only needed one play to find the endzone on their next drive. Boston Peyton took the handoff on the fullback dive, and ran 68 yards to the house. JC got the two-pointer and the Bulldog lead was shrunken to 22-15 with 7:05 to go in the half.

Carmi struggled to move the ball on their ensuing possession, punting it away after three plays. Once again, the Indians just needed one play to score. On the exact same play design, Evan Sanders took the full back dive 74 yards untouched to the endzone. With a made point after, the game was suddenly tied at 22-22 with 4:26 to go in the 2nd.

The Bulldogs took over the ensuing possession at their own 30 yard line, and it only took three plays to regain the lead. King took the handoff and took it 65 yards, breaking tackles and dodging defenders to put the Bulldogs back in front, 28-22 with 2:35 left in the 2nd quarter.

Johnston City had time to get one more score in before the half. The Indians tried to throw the football, but quarterback Connor Mowery would be sacked by CWC’s Gavin Peyton near midfield and time would run out to give the Bulldogs a 28-22 halftime lead.

JC got the football to start the 2nd half, and thanks to a great return by Causey, the Indians had great field position deep inside Carmi territory to begin the 3rd quarter. Facing a 4th & 6 from the CWC 10 yard line, the Indians would try to run it on the edge with Watson, but the Bulldog defense made the stop to turn the ball over on downs.

CWC picked up one first down on the drive, but were forced to punt the football away a few plays later. After the punt, Johnston City drove right down the field, capping off a long drive with a 1-yard quarterback sneak touchdown by Mowery. The Indians would run in the two-point conversion to take a 30-28 lead with 56 seconds left in the 3rd quarter.

The Bulldogs had plenty of time to put together a potential go-ahead drive, which began at their own 29 yard line. After a facemask penalty against the Indians put the football at the JC 45 yard line, King would rip off a long run inside the 10 yard line, but it would be called back due to a holding penalty on the Bulldogs. Three plays later, Draxtyn Aud would pick up a first down inside the Indian 20 yard line, but it also would be called back by a holding penalty. After an incomplete pass on 3rd and 12, the Bulldogs sent out the punt team with the football on the JC 36. The Bulldogs called a timeout to set up a fake punt play, but the Indians sniffed it out. Johnston City took over at their own 36 yard line with 7:26 left to go in the ball game and a 30-28 lead.

8 plays and 4 minutes later, the Indians found the endzone for the final time. Watson took it in from 7 yards out, Kaden Dover knocked in the extra point and the Indians lead was now extended to two possessions, 37-28 with 3:04 to play.

The Bulldogs tried to drive down the field with urgency, but they didn’t have enough time to erase a two-possession deficit, and time ran out. The Indians held on to win the game, and the Black Diamond Conference Championship.

“In a game like this, you can’t give up big plays,” CWC head coach Kurt Simon said post-game. “Their offensive line is a really good offensive line, and their scheme that they’re using this year has fits well with their personnel. Give them credit for those big plays.”

“We still have one regular season game left, it’s our senior night. We’re going to prepare as well as we can like we normally do and come back and try to play a really good game as we head to the playoffs.”

So what exactly does this loss mean for Carmi in terms of postseason? Well, it doesn’t change their fate much at all. Assuming the Bulldogs defeat Flora at home in week 9, they can still compete for a top 5 seed in the southern 2A bracket. The Bulldogs will still be at home in the first round of the playoffs, and yes, there is a possibility these two teams could potentially meet in the 2nd or 3rd round of the playoffs. We will know Carmi’s playoff fate next Saturday, October 22nd during the IHSA Playoff Pairings show.

The Bulldogs (7-1) will host the Flora Wolves (4-4) to wrap up the regular season this Friday for Senior Night and White Out Night. 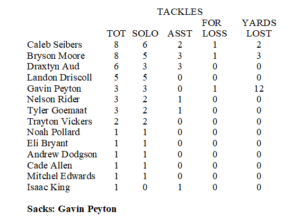