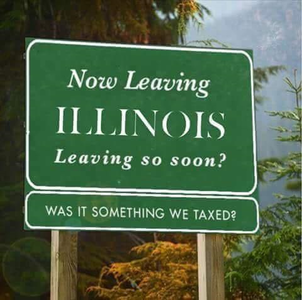 Illinois now has the dubious honor of having the highest taxes in the United States, according to an analysis by personal finance website WalletHub, which looked at state and local taxes, income taxes, real estate taxes, sales and excise taxes, and vehicle property taxes for the report.

The study shows the average Illinois household pays nearly $9,500 a year in state and local taxes, the highest in the nation, showing Illinois with the highest overall effective state and local taxes, and the second-highest real estate taxes in the country. Analyst Jill Gonzalez said Illinois’ gas taxes catapulted the state to the top of the tax rankings. This year, more than 38 cents in taxes are added per gallon of gasoline in Illinois, which is over 41% greater than the national average. Illinois is one of seven states that adds a general sales tax on top of the gasoline tax. In July 2020, the state had its first automatic gas tax increase by the rate of inflation. The money is intended to help fund a $45 billion capital plan.

The study also found that 74% of people feel the government has not handled their tax dollars wisely during the COVID-19 pandemic.

Bryce Hill, a senior research analyst with Illinois Policy, said he expects more Illinoisans to move out of the state because of poor labor and housing market outcomes, stating that “The largest thing affecting those outcomes are the state’s high tax burden and unfriendly business environment that makes it difficult for people and businesses to move to or invest in Illinois.”

Behind Illinois, residents in Connecticut and New York pay the highest taxes. Alaskans pay the lowest taxes, followed by Delaware and Montana.