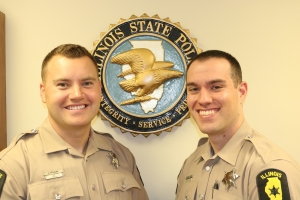 Trooper  Jonathan  Pflaum,  originally  from  Olney, Illinois, joins  the  Illinois  State  Police  after serving a combined six years as a police officer with the Mt. Carmel and Olney Police Departments.  Trooper Pflaum is the son of  Johnny  and  Angie  Pflaum of  Olney,  and  a  2009  graduate  of  Richland  County  High  School.   He  earned an Associate’s Degree in  Criminal  Justice  from Eastern Gateway Community  College in 2018. Trooper Pflaum will reside in Richland County.

Trooper  Gabe  Schimp,  originally  from Eldorado,  Illinois,  joins  the  Illinois  State  Police  after serving four years as a police officer with the Eldorado Police Department.  Trooper Schimp is the son of Chris and Jan Schimp of Eldorado, and a  2009 graduate  of Eldorado High  School. He earned a Bachelor’s Degree in Criminal Justice from Southern Illinois University in 2013.  Trooper Schimp will reside in Saline County. Lieutenant Hinkle would like to welcome Trooper Pflaum and Trooper Schimp to District 19.  He, along with the officers in District 19, wish them the best of luck as they begin their law enforcement careers with the Illinois State Police.