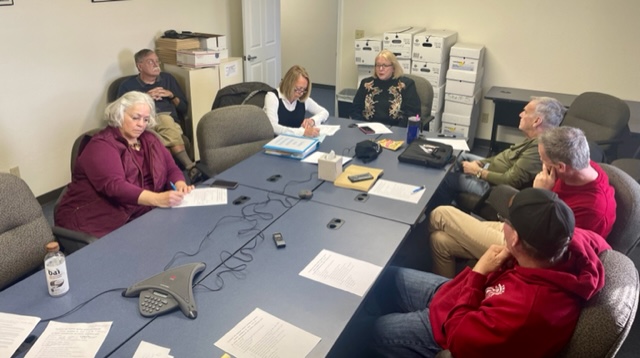 To the average citizen, not much has changed since May 21, 2012.  That’s when the Harmony Way Bridge abruptly closed down due to safety concerns.  In 2020, officials officially took ownership of the span as it was transferred from the White County Bridge Commission to the newly formed joint entities, the Illinois New Harmony River Bridge Authority and the Indiana New Harmony and Wabash River Authority.  The new ownership established the groups’ attempts to bring the bridge back to it’s intended use as a vehicular bridge with a potential bike/hike patch component.  For two hours Friday, members of each faction gathered for a formal meeting to discuss progress.

At this point, it’s mostly political as both federal RAISE grants the commission has applied for thus far have been denied.  The group is awaiting an exit interview so they can better prepare for future grant requests.  Schanzle says she’ll be in Washington, D.C. in the early days of January for Senator Tammy Duckworth’s swearing in and expects an update on a specific grant application.

Another USDOT Grant application, the Reconnecting Communities grant is another avenue the group is pursuing.  Schanzle says it addresses communities who have a fractured infrastructure creating economic disparity in those communities.

Following that, Schanzle says the most devastating blow came from the loss of the ability of the White County Bridge Commission to be able to apply for federal or state grants.

At this point, the groups are looking to garner enough funding that they can get “shovel ready” for the actual project and current estimates are they’ll need around $2 million to get there.  That money will most likely have to come from Illinois since Indiana has already given $350,000 in “seed” money.

The next RAISE grant is due to be turned in by end of day on February 28th.  $1.5 billion dollars will be up for grabs in the next round.  The group also set 2023 meeting dates as January 24th, April 25th, July 25th, and October 24th.  Members present were invited by WROY/WRUL News to submit an Opinion/Guest Editorial piece answering the question, “What would you tell folks who say this effort is a fool’s errand?”  We look forward to bringing you any responses they may share.