Early this morning at approximately 1:00, Trooper Alexander Welsh was patrolling US 41 northbound near I-64 when he observed a Ford Mustang and a Yamaha motorcycle traveling north at a high rate of speed.  Trooper Welsh contacted a nearby Gibson County Sheriff’s Deputy and they attempted to stop both vehicles on US 41 south of Fort Branch. The driver of the Mustang stopped, but the rider of the motorcycle accelerated and continued north on US 41 in excess of 120 mph. The rider turned east on CR 800 South and continued to travel at a high rate of speed. Trooper Welsh disregarded the pursuit due to safety reasons. 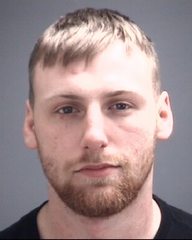 During the traffic stop with the driver of the Mustang, officers were able to identify the rider of the motorcycle as Chase Singleton, 23, of Fort Branch.  Indiana State Police and Gibson County Sheriff’s Department responded to his residence and arrested Singleton without incident.  He was taken to the Gibson County Jail. He was later released after posting bond.