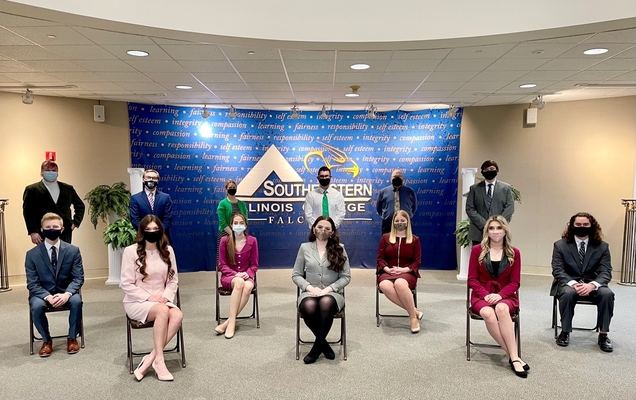 To earn the prize, the Falcons bested top competitors from 37 other colleges and universities including Yale University, Vanderbilt University, the United States Air Force Academy, and California State University, Los Angeles. While the tournament is normally hosted outside of the United States, this year the championship was virtual, making it affordable, and thus it was the first time the Falcons have had the opportunity to compete in an international tournament.

“It was exciting to have the opportunity to participate in an international event for the first time, and winning this tournament, it just shows how special and how talented these students really are,” said SIC Director of Forensics Jenny Billman, admitting she has shed tears several times over how proud she is of this team. “The competition here was older with more experience overall, considering our freshmen and sophomores were competing with juniors and seniors of some very prestigious universities that attend the competition annually.”

The tournament lasted for two weeks, and SIC had hoped to advance even one event to elimination rounds, but ended up advancing 19 events. Raleigh student Tiffany Turner earned two IFA titles, one in prose interpretation and the other in dramatic interpretation.

“This team has defied the odds given the circumstances and challenges. I am humbled and honored to be part of something so wonderful!” said SIC competitor Tiffany Turner.

“We are grateful that we are still able to do an activity we love despite the pandemic,” explains Billman. “We have tremendous institutional support from faculty, administration and the Board of Trustees. It is clear they value and understand the benefit of speech and debate education.

“We are just so proud that our small community college in rural Illinois could take on Ivy League schools at the international tournament – and win. But the truth is, being from a community college is a massive advantage,” Billman explains. “Our team wins because every one of our students gets individual attention. As a community college faculty member, I don’t have to publish or perish, and I’m not outsourcing my students to graduate assistants. I’m free to focus entirely on students, and I’m grateful for that.”

She went on to say, “One of our team members also made a particularly funny observation this weekend when he said, ‘We won the tournament and I don’t have college debt! It’s like I won twice!’”

The team is coached by Jenny Billman, John Corum, and Paul Cummins. Individual results from the tournament are as follows.

Other members of the IFA champion team include Haley Rice (Stonefort) and Hunter Rechsteiner (Benton).

SIC President Dr. Jonah Rice, a member of the 1986 national champion team and speech coach of the Falcons for many years, said “This win is historic for sure. SIC could never afford to go to IFA tournaments, but virtual technology allowed our team to compete on a world stage. How many community colleges can say they beat Yale University at a tournament?”

The team will be celebrated at a private luncheon this week with SIC board members and administrators. This weekend, they will host and compete in the Region IV tournament, and will end their season at the Phi Rho Pi National tournament a couple of weeks later, which will be virtual, as well. Both the regional and national tournaments will be among only community college competitors. Supporters are encouraged to follow their Facebook page, SIC Forensic Falcons, for updates, to congratulation them, and to wish them well on their upcoming tournaments.

The Southeastern Illinois College speech team began in 1970 under coaches Gary Allan and the late George Dennis. The team hit the top 10 nationally in the late 1970s and has placed in the top five community colleges nationwide more than 25 times, with hundreds of individual championships. The team earned its first national title in forensics in 1986, with additional titles following in 1997 and 2005. For more information, visit www.sic.edu/ForensicFalcons or join them on social media: www.facebook.com/ForensicFalcons.