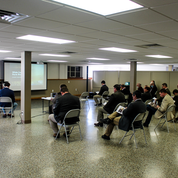 Due to Covid-19 guidelines, the White County Farm Bureau had to limit in-person attendance for their 100th Annual Meeting. 21 members and guests attend in person. A Zoom link was offered for members to join virtually.

The annual meeting of the White County Farm Bureau was held on Friday, January 22, 2021, marking the 100th annual gathering of the organization. Unfortunately, due to Covid-19 guidelines, the centennial meeting was not marked with the celebration it deserved. 21 invited members and guests met in person at the Farm Bureau office, and one member joined via Zoom.

Vice President Larry Beck of Carmi retired from the board of directors. Beck served on the board since 2000.

The meeting concluded with the premier of the Centennial Video, a compilation of interviews Manager Doug Anderson recorded with eight of the nine living past presidents of the organization. The video can be watched by searching for “White County Farm Bureau” on YouTube.com.

The meeting also saw the release of the Centennial Booklet. The 36-page full color booklet contains over 100 historical pictures as well as the significant dates in the organization’s history, a listing of all the individuals who have served on the board for the last 100 years; a list of past presidents, past vice presidents, past managers, and past administrative assistants, centennial farms in the county, and ag facts. The booklet is free to current Farm Bureau members, limit one per membership. Members can pick up their booklet at the White County Farm Bureau office.