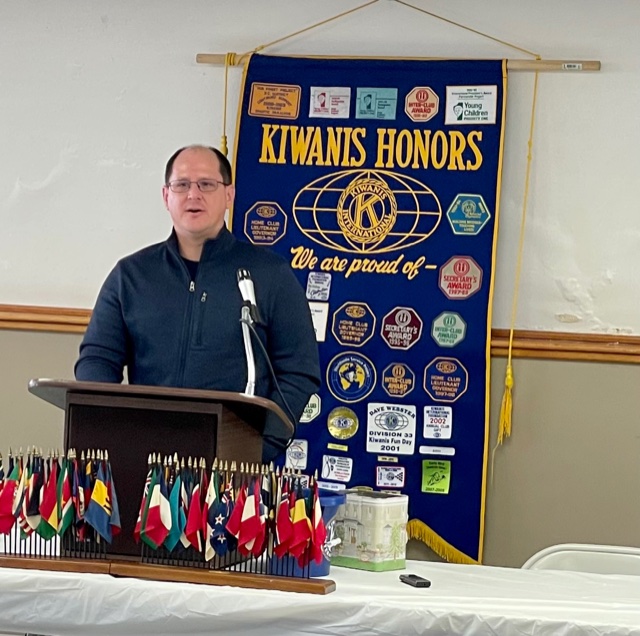 Carmi Police Chief Jason Carter is, despite what he describes as a difficult environment currently for law enforcement, loving his job and looking forward to the future.  An Enfield native, Carter joined the Carmi Police force following a 5 month internship with the Illinois State Police and a year with the McLeansboro PD.  He worked as a patrolman from 2002 through 2009 when he was promoted to Sergeant.  In 2013, Carter was promoted to Deputy Chief and he took the top post a year later.

Carter gave an update on the new Carmi Police Department, the old Leggett’s Market building, at the Thursday Kiwanis meeting.  He says work has progressed quickly so far and he expects they’ll be in by June if no other major hindrances present themselves.  The biggest reasons for the move, Carter says, boils down to finances and space.

Government mandates will be requiring body cameras soon for law enforcement and additionally, the department will be required to store that body cam footage for a period of time which again is a matter of space to store that secure server.  Additionally, while a requirement, local law enforcement has been outspoken about the lack of funding to pay for these new requirements.  The second issue, finances, is a complicated issue that dates back to the 1970’s when the White County Jail was built.  Carter says the agreement between the County and City was a good one at the time.

The police chief says he expects the symbiotic relationship between the Sheriff’s and Police Department to continue in spite of their amicable, physical separation.  He says from 2015 through current, the city has spent 1.5 million dollars more than what they would’ve if it was just their percentage of dispatching fees.  He expects the department will save a minimum of $150,000 per year after the switch.  Other communities including Grayville, Norris City, and Enfield are now paying their fair share through new dispatch agreements set up over the last couple years.

Carter says his department is the only agency that serves the county 24/7 and is made up of 10 full time officers, a secretary, 3 auxiliary officers, and a K9.  With the recent retirements of Donna Huber and Brad Spence, the department has recently added Mitch Malone from Grayville and Matt Long of Norris City.  He’s looking forward to being back at full strength.