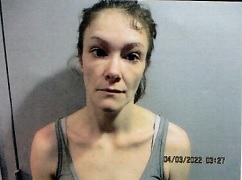 A 31 year old Carmi woman is being housed in the White County Jail following multiple arrests over the last few days.  Misty McFarland’s address is listed as 727 Shipley Street though an order of protection is allegedly supposed to keep her away from residences at 725 and 727 Shipley.  Law enforcement last week arrested McFarland on a violation of that order of protection after finding her hiding in a shed on one of those properties.  Sunday, White County Sheriff’s authorities again found McFarland in a white Dodge truck sitting in front of 729 Shipley.  The report indicates a struggle to get McFarland detained.  She now faces a laundry list of charges including 2 counts of Violation of Order of Protection, 8 counts of Aggravated Assault, a count of Intimidation and Unlawful use of weapon by a felon.  In addition, McFarland is facing misdemeanor charges of Obstructing Justice and Resisting Arrest.  She’s behind bars on $7,500 bail.  McFarland is due before Judge Webb in White County court for a first appearance on Wednesday afternoon.