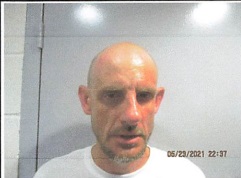 A Carmi man is behind bars at the White County jail and now facing a laundry list of charges.  Carmi Police say they pulled over 42 year old Joseph L. G. Allen of rural Carmi on Sixth Street around 1:30pm Monday.  The traffic stop resulted in arrest and charges of Fleeing/Attempting to Elude a Police Officer, Felony Driving While License Revoked, Possession of Meth (4.39 grams), Possession of Drug Paraphernalia, Unlawful Use of Property, and Threatening a Public Official.  In addition, Allen was wanted on a White County Failure to Appear warrant and a Williamson County Failure to Appear warrant.  The total bond on the warrants was set at $7,000 cash.  A judge will set bond on the other charges.

A Carmi woman says her daughter’s bicycle has been stolen.  Amanda Hunsinger told Carmi Police yesterday afternoon that the bike was taken from their Fackney Street residence sometime over the weekend.  The bike is described as purple and gray.  Carmi Police helped facilitate the filing of a Theft report.  If you know where or think you see the bicycle in question, contact law enforcement at 618 – 382 – 4633.