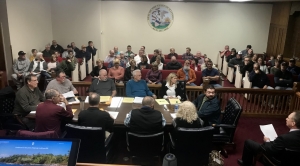 Property Taxes…and poor execution in explaining the public notice, led to about 1.5% of the population to show up for a public hearing Tuesday night.  Due to the overwhelming turnout, Tuesday night’s Municipal Truth in Taxation Public Hearing was moved to the White County Courthouse.  More than 70 individuals turned out, wanting to learn more directly from the horse’s mouth and have an opportunity to get bent and wiggly if they deemed it fitting.  There was no shortage of those willing to speak up either with more than a dozen taking an opportunity to address or ask questions, including Keith Johnson, Stan Lovell, Josh Haley, Rick York, Dee Stone, Sharon Pollard, Kim Gwaltney, Sam Thomas, Debbie Bunting among others.  City Attorney Greg Stewart served as moderator and made sure anyone who wanted a platform was heard.  All said, the public hearing went nearly two hours.

Some in attendance were upset simply at the 25% total that showed up in the notice, but were given an accounting and civics lesson when told the percentage was only of the Carmi portion of their taxes, not the total amount and was the highest one of three potential choices.  City CPA since the early ‘80s, Keith Botsch began.

That means at the 25% increase, Botsch estimates a property with current taxes of $3,164.50 could expect a property tax raise of $87.94.  And while that doesn’t sound like a ton relatively speaking, some of the public that turned out expressed their “flat out frustration” with being taxed and there was no amount of a raise in taxes they would accept.

Botsch and Mayor Jeff Pollard warned the community that if they didn’t address the situation at this time, the council would be “in the hole” within 2 years and would be in the same situation, but would be faced with a much more significant raise than even 25%.

Following the public hearing, about 17 of the community members followed council back to Chambers for their official meeting.  Alderman Doug Hayes reported that it appeared the jail would come in almost $130,000 under budget and expressed that those dollars might potentially help down the line.  Hayes also said he understood that the community wanted to keep taxes as low as possible, but put some of the responsibility back on residents expressing his frustration of seeing delivery parcels including items like toilet paper purchased from online stores rather than shopping locally which he says directly impacts local taxes.  He said he was fine with continuing at 5%, but that people will have to do and spend more locally to make sure it’s a team effort.  After a bit more discussion and it being determined that a 15% raise for the following year would put off having to address it for 5 years rather than 2 (which was stated if the tax was continued at only 5%) along with the given estimation that the average home in White County, at the 15% tax hike, would see a raise of on average $52, the board unanimously passed the ordinance for the levy and assessment of property tax (January 1, 2019 – December 31, 2019) by an 8-0 vote.