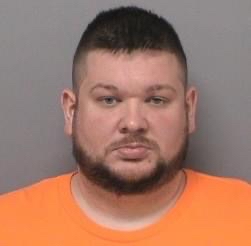 In September 2022, the Benton Police Department received information from a juvenile claiming to be the target of some form of sexual exploitation. Officers handling the complaint in Benton contacted Detectives from the Jefferson County Sheriff’s Office and a coordinated investigation begun. The investigation resulted in a search warrant at the residence of the suspect, 28-year-old Garrett S. Biggerstaff of McLeansboro, IL. Evidence was collected and examined by the Sheriff’s Office member of the Internet Crimes Against Children Task Force. From this work, a second juvenile victim was identified.
The completed investigation was turned over to the Jefferson County State’s Attorney’s Office.  The case was reviewed and arrest warrants for Biggerstaff were issued in Jefferson County Court on January 4th, 2023.

Jefferson County Detectives, with the assistance of the McLeansboro Police Department and US Marshall’s Service served the arrest warrant on January 5th, 2023. Biggerstaff was arrested on the warrant for two counts of Grooming, with bond set at $150,000. He was transported to the Jefferson County Jail and booked in on the felony charges. Biggerstaff is considered innocent until proven guilty in a court of law.