A year of work was rewarded Saturday,November 2 at the annual 4-H Evening of Excellence Achievement Awards Night held at the Norris City High School in Norris City. Members and clubs received medals, prizes, and honors for their work completed September 2018 through August 2019. Every one of the 148 members of 4-H was called individually on stage to receive their awards. 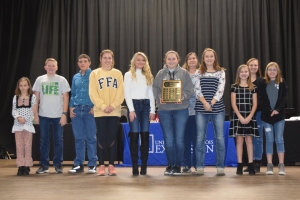 The Enfield Blue Ribbon 4-H Club received the Club of the Year Award, sponsored by the White County Farm Bureau. The group conducted several community service projects including having a clothing drive for a former 4-H member’s family, supplied an auction basket for an event to raise money for St. Jude’s, weeded the landscaping at the Extension Office, conducted a National Day of Service over many days at the Enfield Park repairing, cleaning, painting, and placing benches to revamp the park, and so much more. Karen McKinney and Holly Healyare leaders of the club. 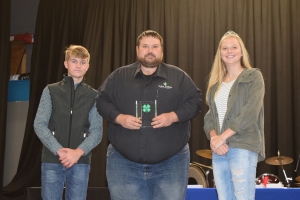 The Friend of 4-H Award honors businesses and individuals who have given their time, talents, and resources to improve the 4-H program. This year, the Friend of 4-H awards were given to Janice Gates and Farm Credit of Illinois. The 4-H motto making the best better is exemplified through the dedication and support that they all give to White County 4-H. 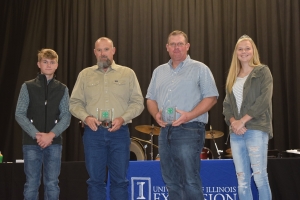 Two other special men were also honored.  Jason Draper and Phil Healy are devoted, caring, hardworking, and generous.  They go over and beyond for the 4-H community and our local clubs and livestock committee.  With their many years in 4-H while growing up as a child, in the Town & Country Funsters and the 76 Clovers, and now their children in 4-H, they know what it is all about and how to actively serve and work in the community. 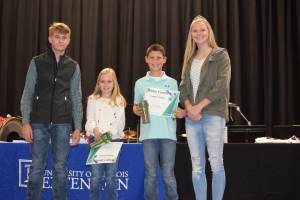 Two first-year members were given full scholarships to 4-H camp as recipients of the Outstanding First Year Member Award. They are Cooper Fuqua of the 76 Clovers 4-H Club and Katelyn Garner of the Centerville Ripsnorters 4-H Club. 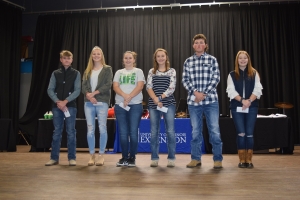 The White County Extension Support Committee once again honored the new Corn King, Queen, and all of the attendants.  The Committee wanted to show them their appreciation of their willingness to participate in all the activities this past October.  They also would like to thank the Corn King and Queen for their willingness to take on extra responsibilities throughout this coming year, as in riding in all the parades Kiwanis asks of them.  We are proud that you represent the face of White County: 2019 Corn King Nate Garner, 2019 Corn Queen Payton Dixon, and their attendants;Lane Buchanan, Claire Cawthron, Laney Cawthron, Chase Harms, and Samantha Stallings. 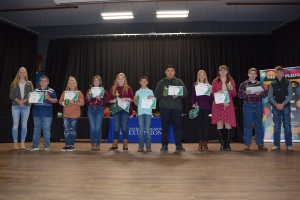 The Victory Award recognizes 4-H members who attend the most activities and complete the most projects during the year. Three age divisions winners (8 and 9-year-olds, 10 and 11-year-olds and 12-year-olds) in each club are selected, then an overall county winner for each division is selected. Club winners in the 8 and 9-year-old group were Cooper Fuqua of the ’76 Clovers, Katelyn Davis of the Mad Hatters, Alexus Gates of Crossville Prizewinners, Braxton Wheeler of the Enfield Blue Ribbon, and Travis Nausley of the Centerville Ripsnorters. Katelyn Davis was the county winner of the 8 and 9-year-olds.Winners in the 10 and 11-year-old group were Marlee Fuqua of the ’76 Clovers, Eli Bryantof the Mad Hatters, Breyton Sauls of the Centerville Ripsnorters, Grace McCarty of the Grayville Go-Getters, and Jax Jordan of the Crossville Prizewinners. Grace McCarty was the county winner.Winners in the age 12 group were Katelyn Allen of Mad Hattersand Joseph Gates of the Crossville Prizewinners.  Joseph Gates was the county winner of the age 12 group. 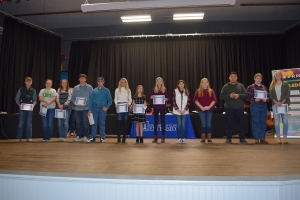 The Ken Korte Memorial Safety Award recognizes 4-H members who have outstanding work in the safety area. Brooklyn Rahmoeller took first place in the junior division, followed by Annsley Healy in second, and Katelyn Davis third.  The winner in the senior division was Caitlin South, followed by Lane Buchanan in second. The 4-H members received cash prizes sponsored by the Wabash Christian Therapy. 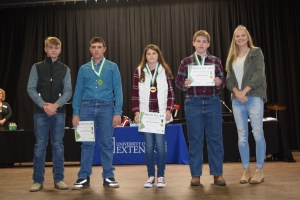 The Nolan Encouragement Award urges young people to keep trying hard no matter how big the obstacles are in their way.  That ‘never give up’ attitude is recognized in this year’s four winners;Kinley Carter, Lincoln Draper, Trey Dixon, and Joseph Gates. 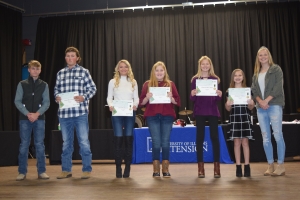 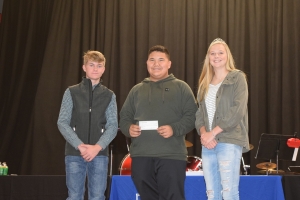 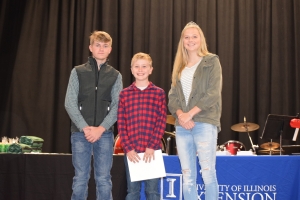 Abe Sutton decided this past year that he wanted to take electricity as one of his many projects. For his work, Abe earned the Illinois Electrification Council plaque.

Josephine Hubele was recognized as an Illinois 4-H Experience Award – Diamond – Leadership recipient for her accomplishments during the 2017-2018 4-H year.  During the recent state awards celebration Lisa Diaz, U of I Extension assistant dean and director of Illinois 4-H said, “Our awardees embody the true spirit of 4-H, having made a difference not only in their communities, but also Illinois and the nation.  We are proud of the dedication, service, and fortitude of the young men and women who have developed through out 4-H programs.” 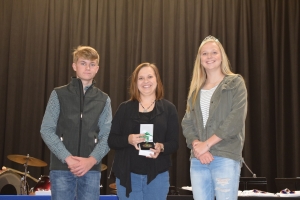 A White County volunteer was honored for her service as a 4-H volunteer. Holly Healy was one of 80 volunteers recognized by the Illinois 4-H Foundation as a 4-H Hall of Fame recipient during a ceremony Tuesday, August 13 at the Illinois State Fair in Springfield.  Holly Healy is a wonderful, long-time supporter of 4-H and Extension in White County.  She was a 10-year member of the Town and Country Funsters 4-H Clubs, and has spent at least the past 15 years serving as a volunteer for the Enfield Blue Ribbon 4-H club and White County 4-H.  Holly has served and continues to serve on many committees related to 4-H.  She has always been willing to volunteer whenever extra help was needed.  Besides a full time position, Holly homeschools their daughter, assists her husband on the family farm, well-known advocate for Carmi and White County, and an all-around dedicated 4-H mom.  White County 4-H is blessed to have Holly as a 4-H mom, leader, and supporter!  The Illinois 4-H Foundation established the statewide Hall of Fame in 2004 to honor and celebrate extraordinary 4-H alumni, volunteers, and former 4-H staff. Each inductee received a commemorative Hall of Fame medallion. 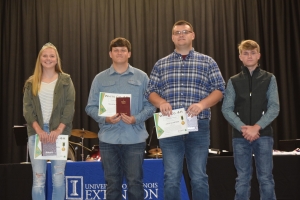 The demands on 4-H members in high school are great, so when they remain in 4-H and continue to achieve success, they are awarded the I Dare You Award. The winners this year wereJace Carter, Payton Dixon, and Kaden Carter. 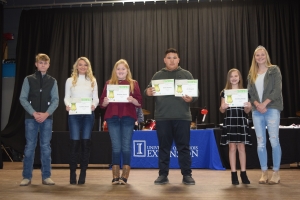 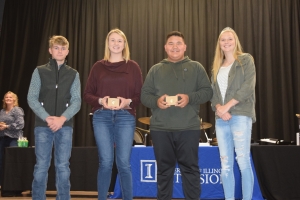 WRUL/WROY and Brownfield Ag was honored to award two young ladies belt buckles on behalf of the Brownfield Ag News.  Presented with these buckles were Kennedy Cook and Issie Bryant. 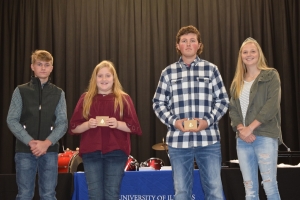 JC Tinsley, on behalf of WRUL/WROY and Brownfield Ag presented the Promotional Performance Award to two young 4-Hers.  The first is a kind of Lifetime achievement recognizing a 4-Her who is nearing the end of their 4-H run, who has shown exemplary commitment to showing up for their role in radio commercials, and who have come a long way from the nervous young person who stepped in front of a microphone for the first time.This year’s winner was Lane Buchanan.The second award goes to a Best of this year, which could be the young person who has shown up the most consistently, shown the most improvement or continued excellence, or is perhaps simply the best ambassador in getting the word out about the programs and activities that 4-H is involved in.  This year’s winner was Katelyn Davis. 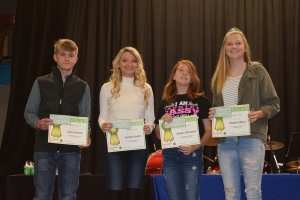