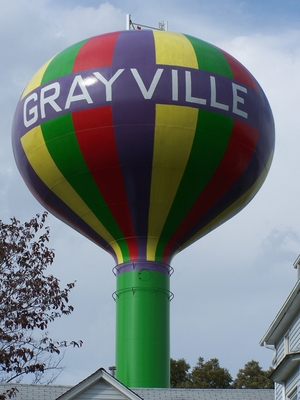 An unprecedented meeting as Grayville commissioners, the mayor, city clerk and even a couple guests gathered for a Council Conference Call Monday night. Technology is gorgeous when it works and a massive pain in the neck when it doesn’t cooperate.  Luckily, only one commissioner had his call dropped and all others were able to effectively communicate from the Go To Meeting set up despite widespread issues with connectivity throughout southeastern Illinois.  A Frontier spokesperson said earlier in the day that bandwidth and data usage was running at about 4X the usual.

Treasurer Sharon Walden reports the city hold assets of more than 2 million, 316 thousand, 40 dollars.  In Commissioner reports, Don Baldwin gave an update on the gas line re-locate project.  “We started again today on the pipeline relocate in the bottoms.  They have all the 4” laid out and welded together except approximately 300 foot.  We might have to bore a small section of the pipeline for safety reasons, for both the pipeline and our employees.  The ditch is caving in at 5 to 6 foot deep and we need to be at least 8 feet, so there’s gonna be a small section of slough area where we may have to do some boring.  Tomorrow, Mid East is supposed to be bringing down the 6” pipe so we can get started on that.”

Commissioner David Jordan also had a couple notes, first reminding folks of the budget hearing set for next meeting on April 27th if the state didn’t give any further directives on cancelling that.  Hand in hand with that, Jordan says, “We have still not established rates to go into effect first of May, I know it’s not a good time, but water, sewer and trash rates have still not been set for this particular fiscal year.  So we’re going to need to find a way to discuss that or bring it up at the next meeting.”  Additionally, Jordan says there are signs of a potential squatter at the old library.  “The only reason I bring this up, a lady says there are some broken windows downstairs and it’s evident there’s been someone in there smoking and eating.  So we probably need to send some guys by to take a look and see what needs to be done to tighten that up.  We don’t need another ‘high school incident’ on our hands with the building being burnt up.”  Jordan says additionally that he’s been notified there are no dumpsters at the Pavilion and he reports oil income for the month at $499.74.

The shelter in place order has led to a few agenda items that were tabled due to no update including the demolition of abandoned properties project, rental property utility bills, a request for TIF Agreement and Revolving Loan for Chad Alldredge, and the Timber Lease.  However, commissioners were able to move forward with approving the Developer’s Agreement and Conveyance of Real Estate to Michael and Moriah Pipher as well as amended terms to their loan agreement moving the loan from 5 to 10 years.  Both of those motions passed unanimously.

In New Business, Commisioners agreed to release the lien of Gillard’s True Value.  The motion was needed so that owner Jeff Gillard would be able to access a Small Business Stablization Loan due to the CoViD-19 pandemic.  The group agreed to the request with the mayor recommending they do so while forming a new agreement that would establish Gillards using their TIF funds to pay off their revolving loan fund.

Finally, the group set a public hearing for their next meeting at 7pm on April 27th regarding the Downstate Small Business Stablization Grant Applications.  The meeting has been set tentatively in hopes that the state will provide the necessary language for that public hearing in the next few days.

All told, the meeting wrapped up in just about 16 and a half minutes.