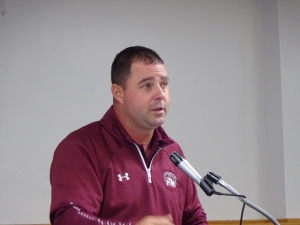 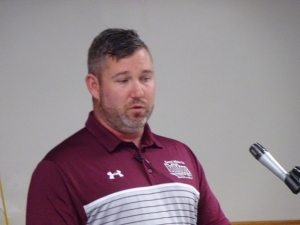 Kevin Wolff, CWCHS Boys Basketball Coach, addressed the Carmi Kiwanis Club Thursday, November 7, 2019 to discuss the 2019 -2020 season. Since try out have not been held as yet, the coach could only speculate about the make up of the upcoming season. He stated three of the previous season starters are returning. Those returning are Ethan Mahan, Ty Barbre and Peyton Edwards. Two who were a big part of the JV team from last year and presumably returning are Devin Rankin and Casey Fulkerson.

The coach stressed that Ethan Mahan, a senior, was a hugh part of the team last year and was chosen “All Southern Illinois” in our class system. He had a fantastic summer in shoot outs and has continued to improve. He will be a driving force for the team this year. This year’s junior, Ty Barbre, played point guard last year and will take a much bigger role in this year’s lineup. The third returner is six-foot six-inch junior, Peyton Edwards. He worked diligently during the summer and matured a lot both physically and skillfully. Both Devin Rankin and Casey Fulkerson saw considerable action as varsity starters last year and will contribute considerably to this year’s squad. Beyond that, we’ll have to wait and see who aspires to the top.

This year’s schedule is similar to last year. The first game will be on Nov. 26 at Gallatin County followed with the DuQuoin Tip Off Classic on Dec. 2. Always a favorite, the Bulldogs will be traveling to NCOE on Dec. 10. You may pick up a schedule card at the high school office.

As far as the conference is concerned, Fairfield will again be the one to beat. Beyond that there is a pack of us vying to take on Fairfield including Hamilton County and Eldorado who will be tough.

Clinton Wolff, CWCHS second year girl’s basketball coach followed up with a review of the girls program for this year. As try outs have already been held, Coach Wolff stated he has 14 young ladies on the team. Although there are three returning starters from last year, this year’s team is a young group. Those returning are senior Sidney Lucas, senior Mariah VanMatre, and sophomore Elligh Gray. Beyond these are one junior and a bunch of pups.

The girls schedule starts with three home games. The opener is on Nov. 18 with North Posey; then Goreville on Nov. 19 and Mt. Carmel on Nov. 21.

In conference play, Hamilton County will again be a strong contender.

In club business, Larissa Hays, second vice president, stepped up to take the reins and wished Happy Birthday wishes to two Kiwanians present – Thys Bax and hubby, Doug. Better than none at all, the club sang to them the birthday song.

In the good news reports, Brad Lee reported on the elementary open houses being conducted and encouraged everyone to attend. Adam and Steve Winkleman were praised for volunteering to install a new hot water heater in the girl scouts’ cabin. Incidentally, this water heater was donated by Shirley Hamblin. Thank each of you for your generosity.