It was a relatively quick White County Board meeting Tuesday night as the group gathered for their January business meeting.  The county accepted 6 resolutions transferring property parcels to individuals from the recent tax sale resulting in $6,225.

In other matters, county board members approved a resolution appropriating funds for County Engineer Brian Ray’s salary as well as for 2020 Maintenance under the Illinois Highway Code and specific fund appropriation for work on Herald Blacktop.  Ray says that Federal Aid agreement includes more than $266,500 for improvements on Herald Road.  Ray also commented the county should expect a 30% revenue increase this year with regards to the Illinois Highway Code Maintenance.  While the money available used to amount to around a half million dollars or more circa 2000, that number has slipped.  Ray says IDOT has expressed that number should rebound this year and he’s hoping to have more than $400,000; that’s more than the $367,000 available this year.  The Board also approved the annual resolution to place Weight Limits on county roads.  Those limits will last through mid April when it’s expected temperatures will rise to satisfactory levels.

In county officer reports, Clerk Beth Sell says W-2’s were printed earlier in the day and should be going out soon.  Ambulance Director Adam Allen submitted his year end report saying WCAS has about $25,000 currently in their account.  Sheriff Maier was absent from the meeting but supplied reports for his office and the jail.  White County Dispatch handled more than 1,050 calls for service in December and the Sheriff’s office responded to 342 calls.  As of the report, the Jail was occupied by 56 inmates including 34 from outside White County.  Those 34 include 22 federal, 5 inmates from Hamilton County, and 7 from neighboring Edwards County.  Coroner Chris Marsh also supplied reports, both monthly and calendar year end.  According to Marsh, there were a total of 163 deaths in White County throughout 2019.  156 of those were from natural causes while 2 were suicides and there were 5 accidental deaths (4 from motor vehicle crashes and 1 accidental overdose).

There was no call for executive session.  The White County Board’s next scheduled meeting will be February 11th at 7pm, again upstairs at the White County Courthouse. 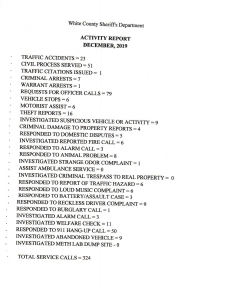 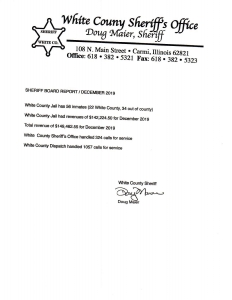