The Carmi Chamber of Commerce “It’s A White County Christmas” schedule is coming together with many more new and exciting events this year scheduled throughout the end of November into December. 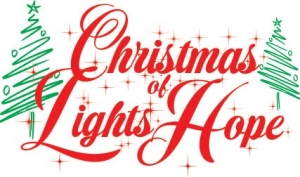 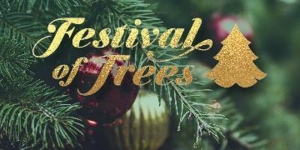 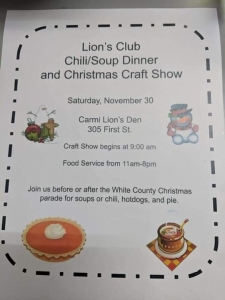 All streets intersecting the parade route will be blocked beginning at 5:30 PM until the parade clears and it is safe to allow normal vehicular traffic to resume.
All intersections will be manned with Carmi Police and Auxiliary Officers and Carmi Fire and EMA who will assist in ensuring safety during the event. The public is encouraged to be aware of this temporary restriction of streets intersecting the parade route and to adjust travel plans accordingly.

Immediately following the parade, The Tree Lighting Ceremony will take place at Veterans Memorial Park with the arrival of Santa Claus and entertainment by CWCHS Singing Six, Payton Dale and Laney York. Please use caution in this area as there will be a lot of traffic and pedestrian congestion in that area following the parade.

With a very good chance of rain in the forecast for Saturday’s Christmas Parade, there is a possibility the parade could be cancelled. As of right now they are still planning on having the parade. Just be advised if the parade should get cancelled the Chamber will make an announcement to both WROY/WRUL and Facebook (Carmi Chamber of Commerce Facebook Page and WRUL 97.3 FM Facebook page) mid to late Saturday morning. Santa will still be in his house Saturday night regardless if the parade is cancelled. 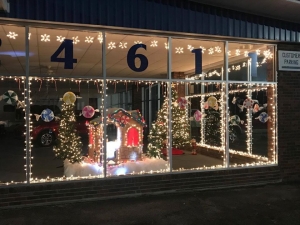 While you are downtown, make sure to check out the beautifully decorated storefronts of businesses that are participating in the Decorated Storefront Window Contest.The winner was White County Ford Chrysler. 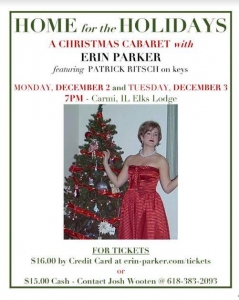 December 2nd, Erin Parker is back in town. “Home for the Holidays,” a Christmas Cabaret, with Erin Parker and featuring Patrick Ritsch on keys, will have performances on Monday, December 2nd and Tuesday, December 3rd at 7:00 p.m. at the Carmi Elks Lodge. Tickets are $16 if you pay by credit card at erin-parker.com/tickets or $15 if you pay by cash to Josh Wooten at 618-383-2093. 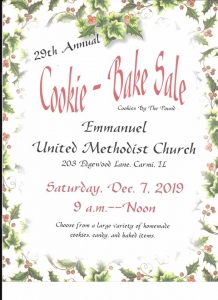 Saturday, December 7th will be the 29th Annual Cookie and Bake Sale, selling cookies by the pound, at the Emmanuel United Methodist Church, 203 Edgewood Lane in Carmi. That will run from 9:00 a.m until noon. There will be a large variety of homemade cookies, candies, and baked items available for purchase. 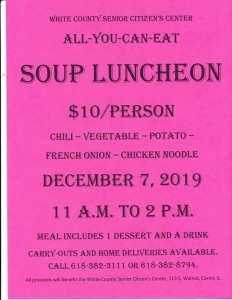 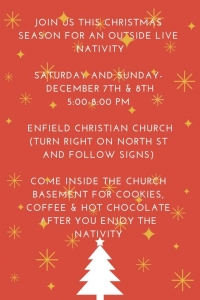 Enfield Christian Church will have an outside, Live Nativity on Saturday and Sunday, December 7th and 8th from 5:00 p.m. – 8:00 pm. (Turn Right on North Street in Enfield and follow the signs). View the Nativity and then come inside the church for cookies, coffee and hot chocolate. 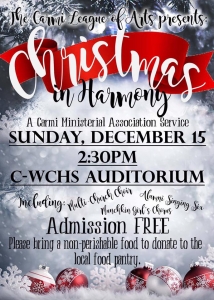 Sunday, December 15th, The Carmi League of Arts in conjunction with the Carmi Ministerial Association will present “Christmas in Harmony,” a worship concert choir, celebrating the true meaning of the Christmas season. Directed by Tracy Orr, the concert will be held at 2:30 p.m. in the Carmi-White County High School Auditorium. 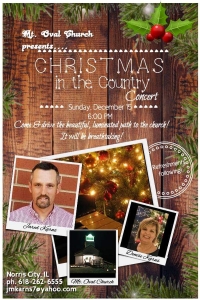 That evening at 6:00 p.m., Mt. Oval Church in Norris City will present “Christmas in the Country” Concert featuring Jared and Denise Karns with refreshments following the concert. They invite you to drive the beautiful, laminated part to the church. It will be breathtaking! 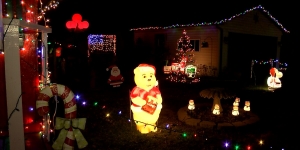 And while not an official part of “It’s A White County Christmas”, Lance Yearby, President of the Carmi Christmas Elves encourages everyone to stop by and see the Bryant’s huge Christmas Display, a family tradition for many years, one of the largest displays in the tri-state, located on Bohleber Drive. Yearby says “Make Carmi, IL a definite stop for this year’s Christmas activities. This is one festive town you don’t want to miss!”