Early Saturday morning at approximately 1:50, Trooper Brock Buchanan located a 2012 Jeep that was parked at an angle on the shoulder at US 41 and SR 241.

When Buchanan approached the vehicle he noticed it was still running and the female driver was passed out behind the steering wheel. When the female finally came to she attempted to drive off, but the vehicle was still in park. Buchanan was able to shut off the vehicle from the passenger side. The female attempted to get out through the driver’s door, but she feel back into the vehicle and sat down on the floor board. 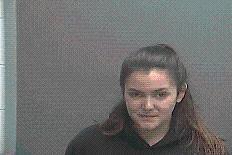 The driver was identified as Brittney Winternheimer, 27, of Evansville.  She was taken to Good Samaritan Hospital in Vincennes where it was determined she had a BAC of .23%. Winternheimer was arrested and taken to the Knox County Jail where she is currently being held on bond.

Driver Steals Fuel; Runs Another Man Off Road; Still On The Lam