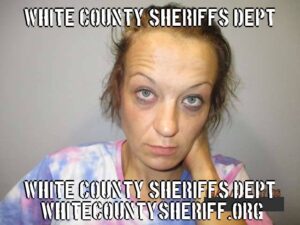 A Crossville woman, 33 year old Sheena N. Garrett, was arrested by Crossville Police on multiple charges Friday night following a traffic stop. Just before 7, Crossville Police stopped a black 2013 Ford Edge on First Street at Hammill Street. The vehicle had been reported stolen out of Evansville, Indiana. Garrett was arrested for Possession of a Stolen Vehicle, Possession of Methamphetamine, Unlawful Use of Property, and Possession of Drug Paraphernalia, after a meth pipe and a baggy containing 1.3 grams of a substance testing positive for meth were found in her purse. She was taken to the White County Jail where she is currently being held.