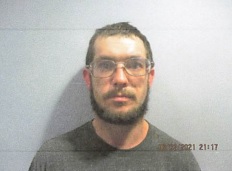 A Carmi man with a history of meth charges is behind bars again in White County.  Carmi Police took 29 year old Daniel Desper of Summit Street into custody and he’s facing a handful of new charges including meth possession.  Law enforcement say they pulled over Desper in a Ford Expedition near the Sewer Plant just after noon Thursday intending to charge him with Driving While License Revoked.  When officers ran the plates on the vehicle, registration came back that the vehicle was supposed to be a Mitsubishi utility vehicle belonging to Alison Barbre.  The sticker showed it belonged on a Toyota sedan belonging to Calkin Bingman.  Those finding resulted in additional charges related to the corresponding offenses.  Also, Desper is charged with Operating an Uninsured Motor Vehicle, Possession of Meth, Possession of Drug Paraphernalia, and Unlawful Use of Property.  Desper is awaiting bond to be set by a judge.  Online records haven’t been uploaded to indicate his next due date in court.

Desper was found guilty of Possession of Meth charges in 2015 and 2018.