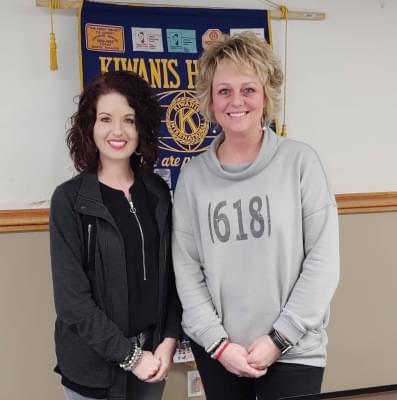 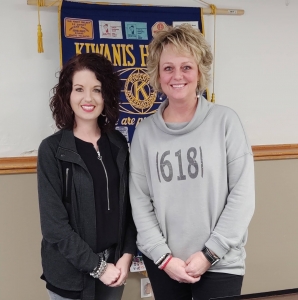 Leigh Gray and Whitney Hobbs, co-owners of DoOver Décor & Botique in Norris City, presented the program. Leigh gave the backstory to their business partnership. The two became friends while attending Ditney Ridge Baptist Church together. Leigh was dabbling in repurposing used furniture, and Whitney was selling homemade crafts. In 2013 they decided to work together and rented a booth in a resale store in Fairfield. They quickly realized they would be more profitable to sell on their own.

Whitney explained that in 2014 they officially became business partners and co-owners of their store. Their business has evolved from operating one day a week to four days a week. They have expanded their store to include boutique items such as clothing, purses, jewelry, and accessories. They constantly research trends to provide up-to-date gift items. Some of the local products they sell are Phillipstown Coffee, Kris’ Table Seasoning, and LeiAnne Westfall’s Creations Cupcakes.

They own their own building at 108 Division Street, the former Masonic Lodge in downtown Norris City. Thanks to a Norris City TIF grant, they have made improvements on the historic building, which is an ongoing process. Social media plays a large role in their business plan. Around 70-75% of their sales come through Facebook, Instagram, Twitter, and Pinterest.

Leigh and Whitney consider it a blessing and honor to have their business. The tagline of their boutique is “All Things Made New” from 2 Corinthians 5:17. A favorite part of their job is going on “Junkin’ Trips” in search of items they can make new. You can contact the owners if you have furniture you would like to repurpose, sell, or donate. The shop is open Wednesday—Saturday from 9 AM to 3 PM (Thursday to 6 PM). They invite the public to come and enjoy a free cup of coffee while browsing their store. They are available to follow on many social media platforms, or you can call them at 618.383.4856.

The meeting closed with a reminder from Past President Katelyne Wolff about Pancake Day on Saturday, February 29th. Tickets are available from any club member.

Howard Arrested For Stealing From Hucks In Carmi