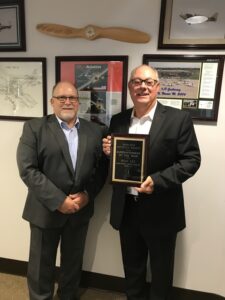 “We are pleased to have an experienced veteran like Mr. Lee representing our group,” selection committee member and Sesser-Valier Superintendent Jason Henry said in a written statement issued Thursday. “Brad has devoted his career to public service through education, beginning his career as a classroom teacher and school principal, and now guiding the Carmi-White County school district. Throughout his career, he has led his district by example, nurturing and mentoring his local and regional colleagues and personally engaging in statewide education leadership initiatives through the state superintendents’ association. He’s a smart, service-based, steady-handed, strong superintendent.”

Lee’s award selection comes at a critical time in public education in Illinois. “Brad
embodies the idea of hard work, long-term dedication, and progressive growth,”
Pinckneyville High School Superintendent and Egyptian Division President Keith Hagene said. “He’s not only strong in the functional areas of school administration, but he thrives on seeing kids and staff members succeed. Genuine leaders like Brad are continually working together, mostly behind-the-scenes, to make a difference for students. Brad is a leader’s leader, and we’re proud that he can represent our region through this award.”

Major Uptick in CoViD cases Thursday throughout Region and State