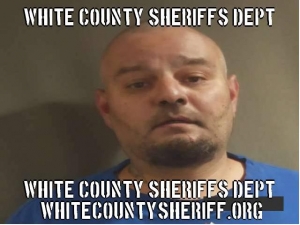 A 35 year old Crossville man, Clayton Andrew Swanner, is being held without bond in the White County Jail on a charge of Aggravated Domestic Battery. The White County Sheriff’s Department was called to a residence in Crossville, where Cathy Brandenstein told Officers her son set fire to the house on Superior Lane and pushed her into the fire. She had severe burns on a major portion of her body. White County Ambulance and fire departments from Crossville, Carmi, and Little Wabash Fire Protection District were called to the scene.There was a small fire on the front porch, the living room had visible flames, and the house was filled with smoke. Officers located Swanner walking down the road in front of the house and transported him to the jail. The Illinois State Fire Marshall is investigating the fire. Online records do not yet indicate a court date for Swanner.