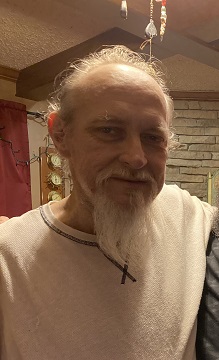 Rodney Dale Allen, 55, of Enfield, passed away on Monday, November 7, 2022.  He was born on October 21, 1967, in McLeansboro, Illinois, the son of Thomas and Virginia (Prince) Allen. Rodney married Amber Kaye Murphy on May 15, 1992.  He had worked at Continental Tire in Mt. Vernon, IL as a forklift operator for the past 10 years.  Rodney proudly served his country in the United States Army achieving the rank of Private. He had attended the First United Methodist Church in Dale until it closed.  Rodney enjoyed the outdoors, woodworking and glass making, but his favorite hobby was sarcasm.

Rodney is survived by his wife of 30 years, Amber; two daughters, Amanda Faye (Corey Phelps) Allen and Tiffany (Charles Crow, Jr,) Hutchcraft all of Enfield; a special friend who was like a son, Daniel South of Enfield; a sister, Saeryon Sedillo of California; six grandchildren, Kayede Faith, Shawn Richard and Haydyn Hope Allen, Clinton Dwayne, Robert Michael and Emi Leighann Hutchcraft; along with several aunts, uncles, cousins, nieces, nephews and friends.  He was preceded in death by his parents, Thomas Allen and Virginia Allen Ayde.