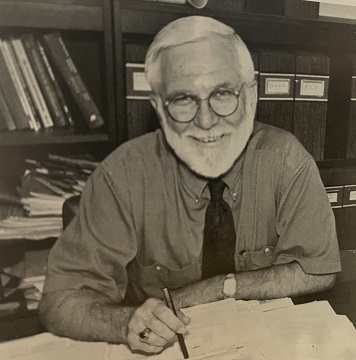 Norman Edward Fechtig, 85, passed away peacefully on Friday, April 15, 2022, at Wabash Christian Village in Carmi. He is survived by his wife Marjorie (Erkman), sons Scott (Nancy Dykhoff) and Mark (Teresa Wilford), 4 grandchildren (Caleb, Caitlin, Nathaniel, Charles), one great-grandson (Garth), brother Allen (Mary Ruth Newlin), brother-in-law Ed Erkman and 10 nieces. He was preceded in death by his parents William J. and Nell (Hutchcraft) Fechtig and older brother C. William Fechtig (Francis Winter) and sister-in-law Jan (Rainey) Erkman.     Norman was born in Carmi on November 15, 1936, and raised on a farm near Enfield IL. He attended several one room country schools in the Mill Shoals and Enfield area and graduated from Enfield High School. He later earned a Bachelor’s Degree in Agriculture and Master’s Degree in Education from the University of Illinois. Norman worked for many years in the White County School system, serving as a teacher at Big Prairie, Brownsville and Norris City, and as an administrator at the White County Superintendent of Schools, Carmi High School, Norris City Elementary School, and Southeastern Illinois College. He was also the owner/operator of Fechtig Feed and Livestock service for several years and served as pastor at the Galatia United Methodist Church for many years.     Norman and Marjorie were the leaders of the United Methodist Youth Fellowship at Emmanuel United Methodist Church before transferring to the First United Methodist Church in Carmi where they served for many years. Norman was an avid gardener and enjoyed sharing the “fruits” of his gardening labor with friends and family. He was a lifelong member of the American Shorthorn Association and greatly enjoyed attending Shorthorn shows and sales all over the Midwest. He was also a long-time member of the White County Historical Society.     Services will be held at Campbell Funeral Home at 12:00 p.m., Wednesday, April 20, 2022 followed by interment at the Bruce Chapel Cemetery. Visitation will be from 10:00 a.m. until service time at noon on Wednesday, April 20, 2022 at Campbell Funeral Home in Carmi. In lieu of flowers, Norman’s family requests donations be made to Hospice of Southern Illinois or the White County Historical Society and will be accepted at Campbell Funeral Home in Carmi.