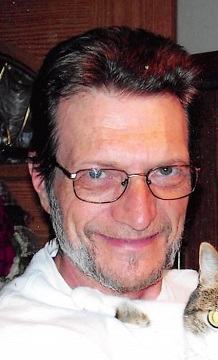 A graveside service for Micheal R. Ackerman, 69, of Heath, Ohio will be held at 1:00 PM on Tuesday, Nov. 24, 2020 at Kuykendall Cemetery in Carmi, Illinois with the Rev. Mary S. Whetstone as celebrant.

A retired telephone operator with A.T.&T., Micheal died at his home November 16, 2020. He was born in Evansville, Indiana to the late Frederick and Dorothy (Morrill) Ackerman.

Micheal enjoyed life and lived his the fullest.  He always had many friends wherever he lived.  Micheal lived and worked in Indianapolis and New Orleans before settling upon his career with A.T.&T. in San Francisco.  It was in San Francisco that he lived most of his life.  For the past thirteen years he lived in Ohio, where he moved to be live with his cousin, Mary and her husband, John.  After seven years, Micheal moved to his own apartment and continued to share in the friendships he had made.

Micheal was a “night owl.”  He loved movies and could name decades worth of Academy Award facts as well as for Miss America and Miss World beauty pageants.  Micheal was an avid football fan especially for the Indianapolis Colts, Detroit Lions, New Orleans Saints and San Francisco Forty-Niners.  His college team was the Notre Dame Fighting Irish and after moving to Ohio, he added The Ohio State Buckeyes.

Micheal’s friends all knew of his love for lions.  He took seriously his love of being a Leo, having been born in August!  Therefore, his pet of choice was a cat to nurture and provide companionship, most recently Delilah.  Micheal was known for his intellect by his many Ohio friends, who were amazed that he had taken four years of Latin at Carmi Township High School where he graduated.  He attended Murray State University for two years and then graduated from Wabash Valley College with a degree in Cosmetology.

Surviving are ten maternal cousins including Mary S. Whetstone and her husband, John Mainieri, of Granville, Ohio.  And numerous Ackerman cousins, including his ‘double cousin’, Julia Ann (Hal) Faulkner, of Carmi, Illinois.  Micheal will be sadly missed by his Tuesday Evening Bible Study; and his friends from Three Oaks Vineyard; especially his dear friend, Margaret Oakleaf.

In addition to his parents, he was preceded in death by his dear maternal aunt, “Teen”, Helen C. Whetstone.

Online condolences may be expressed at www.mcpeekhoekstra.com.