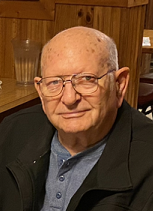 Merrel  Fleck, 88, of Carmi, passed away on Sunday, September 19, 2021, at St. Vincent Hospital in Evansville, IN.  He was born on September 18, 1933, the son of Henry and Alma Irene (Savage) Fleck. Merrel proudly served his country in the United States Army during the Korean War.  He married Dolores Dean Anselment on February 28,1960.  Merrel spent his life farming.  He was a member of the Lions Club, a board member of Farm Bureau for 11 years, and a member of the First Baptist Church in Carmi.

Merrel is survived by his wife, Dean Fleck of Carmi, IL; two sons, Greg (Michelle) Fleck of Newburgh, IN., and Kevin (Renaa) Fleck of Carmi, IL; his grandchildren who are his pride and joy, Cooper Fleck, Abby Fleck and Brandon Fleck,  and  two sisters, Norma Raber of Browns, IL., and Beulah Winter of Anaheim, CA. He is preceded in death by his parents; and siblings, Carl Fleck, Herman Fleck, Norbert Fleck, Roy Fleck and Verla Young.