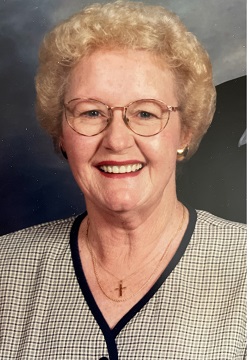 Mary Jo Blake of Carmi, IL passed away March 27 th ,2022 at Gateway Hospital in Newburgh Indiana. She was born June 18 th , 1942 in Detroit MI to James Royal “Roy” and Neta Ruby (Douglas) Rockett. At the age of 10 her family relocated back to their hometown of Springerton IL, wanting to raise their children on a farm.     Mary Jo graduated from Enfield IL High School in 1959, and married Doyle F. Blake on Feb 27 th ,1960 and had two children, Doyle Edward “Eddie” Blake (who preceded her in death in 2010) and Daniel R. Blake, who survives. She has one granddaughter, JoBeth Blake, which considered her as much her mother as a grandmother and reminded her of it many times in the last few weeks. She is also survived by a niece, Becky Lynn Rockett who visited her often with her during her long hospital stay providing comfort, a nephew Martin Virgil Rockett, a very special friend Gail Wheeler (the daughter she never had) who provided care for her for many years, and her extended Blake family. She was preceded in death by a brother, Charlie “Bud” Rockett and a sister Rosemary Douglas.     Mary Jo fearlessly loved God and her family, her faith was very strong and brought her all the comfort she needed as her health rapidly declined the last six months. She was a lifelong member of Springerton Christian Church, very close with Preacher Ron Lamp and his wife Hyla.     Funeral services for Mary Jo Blake will be held at 11:30 a.m. on Saturday, April 2, 2022, at Campbell Funeral Home in Carmi with burial to follow at Springerton Cemetery in Springerton, IL.  Lunch and fellowship is being graciously provided immediately after at Springerton Christian Church Annex. Friends and family may visit from 5:00 p.m. until 8:00 p.m. on Friday, April 1, 2022 at Campbell Funeral Home in Carmi. In lieu of flowers, memorial contributions may be made in Mary Jo's memory to St. Jude Children's Hospital and will be accepted at Campbell Funeral Home in Carmi.