Mary E.  (Mears) Lowery, 88, of Carmi, passed away on December 15, 2021. She was born on October 4, 1933 in Indian Creek Township, the daughter of Cecil C. and Hettie Ruth (Marlin) Mears.  She married Lloyd V. Lowery on December 22, 1950, and he preceded her in death on October 25, 2004.  Mary worked as a bookkeeper for many years for various businesses including oil companies and a Studebaker Car Dealership. Later she worked as a C.N.A. in Augusta Georgia.  She attended Evans Presbyterian Church in Augusta, Georgia where she lived for 30 years before returning to Carmi two years ago. She then returned to attend Ditney Ridge Baptist Church in Norris City.  Mary enjoyed reading, singing and playing the piano.  While in Georgia, she helped organize various functions for her church, as well as worked on the bulletins, military newsletters and helped with organizing reunions.      Mary is survived by her children, Marla Wood of Carmi, IL, Mike (Anita K.) Lowery of Omaha, IL, Max (Cindy) Lowery of Norris City, IL, Matthew Lowery of Augusta, GA, and Martin "Buck" (Anita J.) Lowery of Princeton, KY; 10 grandchildren; 13 great-grandchildren and several nieces and nephews.  She was preceded in death by her husband Lloyd V. Lowery; her parents; one great-grandchild, Mary Kate Hogan; a sister, Peggy Jean Fleck and a son-in-law, William Wood.     Funeral services for Mary Lowery, will be held at 12:00 p.m. on Saturday, December 18, 2021, at Ditney Ridge Baptist Church in Norris City with burial at White County Memorial Garden in Carmi.  Family and friends may visit from 10:00 a.m. until time of service at Ditney Ridge Baptist Church. In lieu of flowers, contributions can be made in Mary's memory to Ditney Ridge Baptist Church and will be accepted at  Campbell Funeral Home in Carmi who is in charge of arrangements. 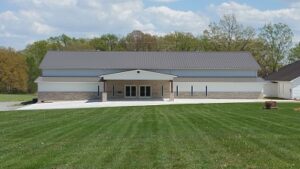