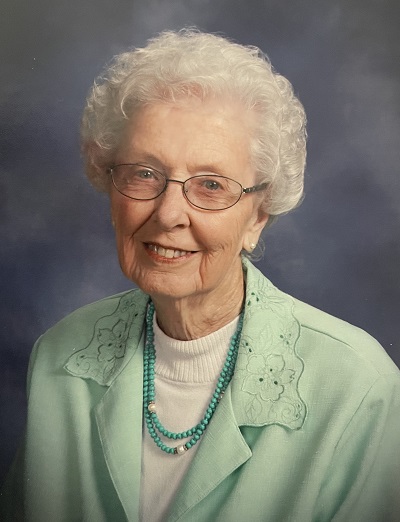 Mabel Zadel Porter (nee Cozart), of Norris City, Illinois, passed away on January 2, 2023, at the age of 94, after a difficult battle with Alzheimer’s disease.Mabel was born December 22, 1928, the youngest daughter of Ernest and Letha Cozart of Harrisburg, Illinois. She was united in marriage to Samuel E. Porter of Norris City, Illinois, on July 11, 1952, in El Paso, Texas. They returned to Norris City to raise their family and work on the family farm.Mabel is survived by her husband, Sam; two children: Thomas Eugene (Pam Marshak) Porter, of Dana Point, California and Terri (Joe) Swan, of St. Louis, Missouri; three grandchildren: Laura McLaughlin (Matt), Holly Jo Swan and Willis Ann Marshak Porter; and four great grandchildren: Tessa Williams, Ryder Williams, Emma McLaughlin and Adalyn McLaughlin.Mabel was a loving wife of seventy years who adored her family.  A graduate of McKendree University, she began her career as an educator in a one-room schoolhouse. For a majority of her career she taught English at Carrier Mills High School and served as school librarian.Mabel lived a life of faith and leaves a legacy of love to those who knew her.The family would like to express their gratitude for those who cared for Mabel at home and at Wabash Christian Village during her illness.Funeral services for Mabel Zadel Porter will be held at 11:00 a.m., Tuesday, January 10, 2023 at the First United Methodist Church, 108 S. Forrest St., Norris City, IL 62869.  Burial will follow in Mt. Oval Cemetery in Norris City.  Visitation will be held at Campbell Funeral Home in Norris City on Monday, January 9, from 4:00 p.m.to 7:00 p.m. and from 10:00 a.m. until service time on Tuesday at the church.  In lieu of flowers, memorial contributions may be made in Mabel's memory to First United Methodist Church in Norris City or the Alzheimer Association and will be accepted at Campbell Funeral Home in Norris City.