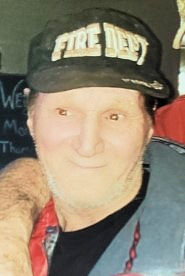 He was born in Wyatt, Missouri on February 14, 1961 to James Marvin and Laura (Nose) Ricketts.

Jerry worked as a farmhand at Grammar’s Orchard near Carbondale until 2005.  He enjoyed working, landscaping, drinking beer, mowing yards and visiting with friends and family.  He was a good man and will be greatly missed by his family and friends.

No formal services are to be held at this time.  Online condolences and expressions of sympathy may be shared at www.gholsonfuneralhome.com