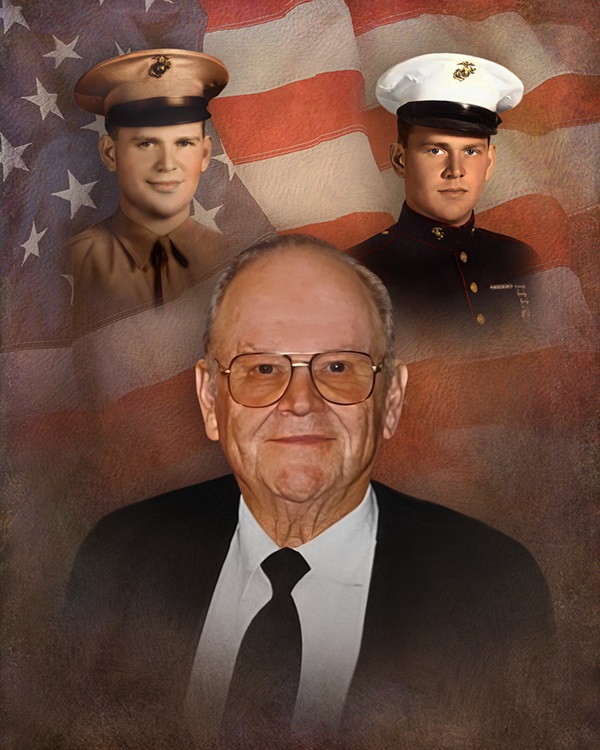 James Robert Endicott, 100, of Carmi, passed away on Friday, September 1, 2022, at Carmi Manor Rehabilitation and Nursing Center. James Robert was born on September 30, 1921, in Carmi, IL, the son of Cyril Cleveland and Madge (Hurley) Endicott. After graduating from Carmi Township High School in 1940, he began his college education at Murray State. In September of 1942 James Robert put his education on hold, answered his nation’s call and enlisted in the United States Marine Corps where he served honorably as a Field Music Corporal and participated in action against the enemy during the battle of Saipan and later in the occupation of China. In February of 1946 after returning from his time in service, James Robert continued his education and graduated from Murray State with a master’s degree in education. On March 28, 1947, he married Virginia Lee Williams in Murray, KY.  James Robert and Virginia Lee shared over 75 years of marriage before her passing on June 29, 2022.

James Robert was a lifelong educator and taught history and economics at Carmi High School for 30 years, after his retirement he continued to share his passion for history with civic groups and school children for many years. James Robert and Virginia ran Teen Town in Carmi for over 34 years. He was a true patriot and community servant who was respected by many. James Robert loved God and worshipped at Zion United Methodist Church. He was a member of Carmi VFW Post #3851 and Carmi American Legion Post # 224. His greatest accomplishment was his family, and he spent much time with them enjoying life.

Survivors include, a son, Bob (Karen) Endicott of Carmi, grandchildren, Stephanie Endicott Viger of Carmi, and Matt (Amber) Endicott of Sesser, IL; great-grandchildren Isaac Viger, Gabriel Viger, Ezekiel Endicott, and Lily Endicott and several nieces and nephews. Along with his wife Virginia Lee Endicott, James Robert was preceded in death by his parents and a sister Betty Gible.

Funeral Services for James Robert Endicott will be held at 11:00 a.m. on Saturday, September 24, 2022, at Campbell Funeral Home in Carmi, IL, with Rev. Van Scott officiating. Burial will follow immediately at North Maple Ridge Cemetery in Carmi, IL, with full military honors accorded by members of the United States Marine Corps, Carmi VFW Post #3851, and Carmi American Legion Post # 224. Friends and family may visit from 4:00 p.m. until 7:00 p.m. on Friday, September 23, 2022, at the Funeral Home. In lieu of flowers and gifts, contributions may be made in memory of James Robert to Zion United Methodist Church and will be accepted at the funeral home. Campbell Funeral Home in Carmi is in charge of the arrangements.