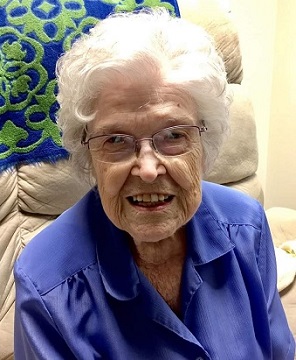 Inez G. Williams passed away peacefully, surrounded by loved ones at Carmi Manor Rehabilitation and Nursing on April 23, 2022. She was 102 years old. Inez Gaines Williams was born on February 15, 1920 to Norbert L. Gaines and Freda (Botsch-Gaines) Bramlet. Inez graduated from Carmi High School in 1938. She married Charles E. Williams on June 10, 1942 and they were married 61 years until Charles preceded her in death in August of 2003. During her lifetime, she enjoyed playing piano, playing Bridge, dancing, reading and golfing. Inez also belonged to the Xi Omicron Chapter of Beta Sigma Phi Sorority. Inez began her working career with the Wabash Valley Abstract Company the day after hergraduation from high school in 1938. During World War II she worked for Chrysler, printing ammunition labels for the war, and Ashland Oil and Refining in Evansville. Other places of employment were Humble Oil and Refining and Julia’s Suburban Dress Shop that she opened in Carmi with co-owner Donna Mitchell in 1962. Moving back to Evansville, Inez was employed by Barger Engineering as an executive secretary for 17 years until her retirement and their returnto Carmi.