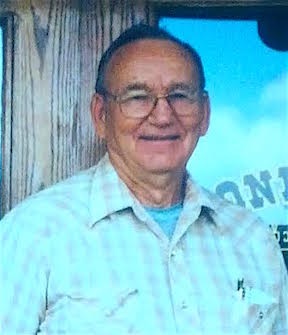 Henry was born on March 4, 1925 at his family’s home near Dahlgren the son of James Thomas Cox & Evelyn (Thompson) Cox.  On May 5, 1950 he married Lola Mae (Rainwater) Cox, who preceded him in death.

Henry had many careers, including: truck driver for PNC in Mt. Vernon, IL; custodian at the Dahlgren School, Farmer, assembling grain bins, and he was involved in the logging operation that took place during the creation of Carlyle Lake.  He was also a U.S. Army Air Force veteran, who served during World War II.  He was awarded the American Theater Ribbon, the Good Conduct Medal, and the Victory Medal while in the service.  He served on the Dahlgren Township board for many years, and was a member of the McLeansboro American Legion Post #106.  He enjoyed deer, duck and pheasant hunting, gardening, and tending to his chickens.  He also loved to go drink coffee at the Dahlgren Village Hall in the mornings to “get his education” from the other visitors there.

Funeral services for Henry Cox will be held at 10:00 am on Saturday, October 29, 2022 at the Gholson Funeral Home in Dahlgren with Pastor Phil Poe officiating.  Visitation will be held from 5:00 pm until 8:00 pm on Friday, October 28, 2022 at the funeral home.  Interment will follow the funeral service at Bethel Memorial Cemetery in Mt. Vernon, IL with graveside military rites performed by the Mt. Vernon American Legion Post #141.  Online condolences, memories, and words of encouragement may be shared at www.gholsonfuneralhome.com