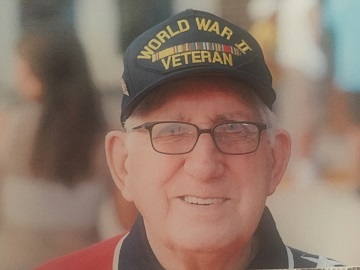 Gilbert E. "Blackie" Wessel, 98, of Mooresville, NC passed away at his home on Friday, April 22, 2022.  He was born in Evansville, IN on September 4, 1923 the son of Edward and Madaline (McCarthy) Wessel.  Blackie married Dorothy L. Felty in Morganfield, KY on September 24, 1949 and she preceded him in death on September 20, 1998.  He worked and Weherle's Bakery and later Sterling Piston Factory. Blackie faithfully served his country in the United States Army Air Force during World War II (1943 -1946) doing the Pacific Tour, receiving 3 battle stars and was a part of Welcome Home Veterans in Mooresville, NC.     Blackie is survived by his daughter, Velva Wessel of Mooresville, NC; son, Darrell Nelson of Carmi, IL; a brother, Cyril Yates of Fairfield, Illinois . He was preceded in death by his  parents , wife, a son, Larry Keith Wessel, daughter, Janice Dale and brother, Delano Yates. Graveside funeral services and burial with full military honors for Gilbert "Blackie" Wessel, 98, of Mooresville, NC will be held at a later date in North Maple Ridge Cemetery in Carmi.  Campbell Funeral Home in Carmi is in charge of arrangements.

In lieu of flowers memorial contributions may be made to the Carmi American Legion Post #224 or the Carmi VFW Post #3851 and will be accepted at Campbell Funeral Home in Carmi is in charge of arrangements.