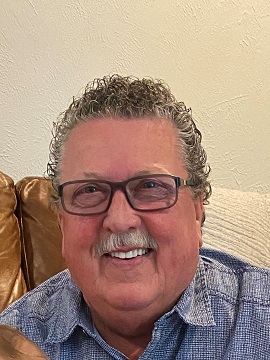 Gary Joe Allen, 67, of Norris City, IL, passed away at 5:40 a.m. on Friday, January 21, 2022, at Linda White Hospice House in Evansville, IN. Gary was born on May 25, 1954, in Carmi, IL, the son of Willard and Shirley Ann (Melvin) Allen Jr. Until his passing, Gary was the Manager of Southern Illinois Lumber Company in Norris City. He began his career there in 1978, working first in the yard, and moved quickly to manager in 1982. For the last forty-three years Gary warmed hearts with his kind smile, and bodies with Southern Illinois Lumber sweatshirts.  He often gave good-natured pestering to all his customers and friends and was known to spoil children of all ages with candy and other sweet treats.

Gary was indeed a social butterfly and never met a stranger; he used his kind words and quick wit to light up the lives of those he encountered. Gary was a longtime member of Springerton Christian Church, he was also a member of The Norris City Lions Club, Norris City Athletic Association, Vice President of Norris City Industries and Vice President and former secretary of the Southern Illinois Lumber Company Board of Directors. Gary's grandkids were his life, and he was their number one fan. He loved attending any and all activities in support of them. He enjoyed golfing, hanging, and shooting pool with friends, and all things sports, especially Fighting Illini Basketball. His love of sports led him to create a Pee Wee Basketball League at N.C.O.E schools.

Survivors include his mother and step-father Shirley and Warney Eckles of Enfield, IL; children, Josh (Janette) Allen of Evansville, IN, Zach Allen of Carmi, IL and Abbey (Chris) Thomas of Evansville, IN; five grandchildren, Aydan Cash, Cade Michael, Everleigh Ann, Beatrice Rose, Emerson Crew and soon to be grandson Kyson Creed; two sisters, Marsha (Raymond) Healy of Norris City, IL and Mitzi Cheek of Enfield, IL; his nieces and nephews and a host of friends who will miss him greatly. Gary was preceded in death by his father Willard Allen Jr., grandparents Willard and Gladys Allen Sr. and a grandson Knox Allen.

Funeral Services for Gary Allen will be held at 11:00 a.m., on Friday, January 28, 2022, at Campbell Funeral Home in Norris City with burial following in Hammack Cemetery in Springerton. Friends and family may visit from 4:00 p.m. until 8:00 p.m. on Thursday, January 27, 2022, at the funeral home. The family asks that if anyone received a Southern Illinois Lumber Company sweatshirt over the years that you wear it to the visitation in honor of Gary. In lieu of flowers, contributions in Gary’s memory may be made to Enfield Rehabilitation and Healthcare Center and will be accepted at Campbell Funeral Home who has been entrusted with the arrangements.