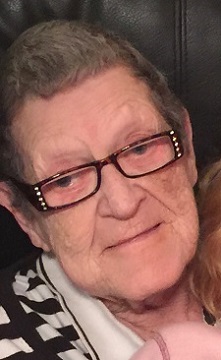 Gale Cutchin, 80, of Carmi, passed away on Monday, October 4, 2021, at Premier Healthcare of New Harmony in New Harmony, Indiana.  She was born on January 17, 1941 in Maunie, Illinois, the daughter of Nolan and Fannie (Williams) Pruitt.  Gale married William "Bill" Cutchin on April 21, 1978, and he preceded her in death on July 24, 1996. She worked as an RN at Carmi Township Hospital and later worked at St. Mary's Medical Center in Evansville, Indiana until she retired. Gale enjoyed reading and loved spending time with her great grand babies.

She is survived by her grandchildren, Tiffany (Buck) James of Carmi, IL and Kory (Ashleigh Webb) Robinson of Carmi, IL; great-grandchildren, Kami James, Keistan Robinson and Karli Robinson; a cousin, Marie King and sisters-in-law, Connie Alzate and Cathy Davis.  Gale is preceded in death by her husband, Bill Cutchin; her parents, and her son, Kevin Robinson.

Services for Gale Cutchin will be private with burial at Big Prairie Cemetery in Carmi, Illinois.  In lieu of flowers, contributions can be made in Gale's memory to the American Cancer Society, and will be accepted at Campbell Funeral Home in Carmi, who is in charge of arrangements.