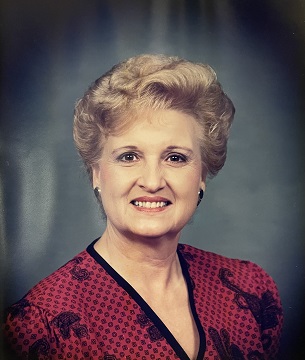 Dona Mae Trout, 90, of Newburgh, IN formerly of Carmi passed away on Sunday, December 25, 2022 at the Linda E. White Hospice House in Evansville, IN.  She was born in Burnt Prairie Township, IL on November 29, 1932 the daughter of Fred and Lena Grace (Williams) Schumaker.  Dona had a long career at White County Bank, beginning as a teller, before moving to the Loan Department and later retiring as a Vice President of the Loan Department.  She was a member of First United Methodist Church in Carmi where she was involved in various church functions.      Dona is survived a daughter and son-in-law, Vicki and Walter Belangee of Newburgh, IN; a sister, Cuma Faye Maurer of Carmi; nieces and nephews, Susan (Jeff) Colson, Janie (Tim) Jones, Jill (John) Gerton and Mark (Holly) Maurer; numerous great nieces and nephews and her grand dog, Savvy Mae.     Funeral services for Dona Mae Trout, 90, of Newburgh, IN will be held at 12:00 p.m., Thursday, December 29, 2022 at Campbell Funeral Home in Carmi, IL. Burial will follow in North Maple Ridge Cemetery in Carmi. Friends and family may visit from 10:00 a.m until service time at noon on Thursday, December 29, 2022 at Campbell Funeral Home.  Memorial contributions may be made in Dona's memory to First United Methodist Church in Carmi, 100 S. Church St., Carmi, IL 62821 and will be accepted at Campbell Funeral Home.