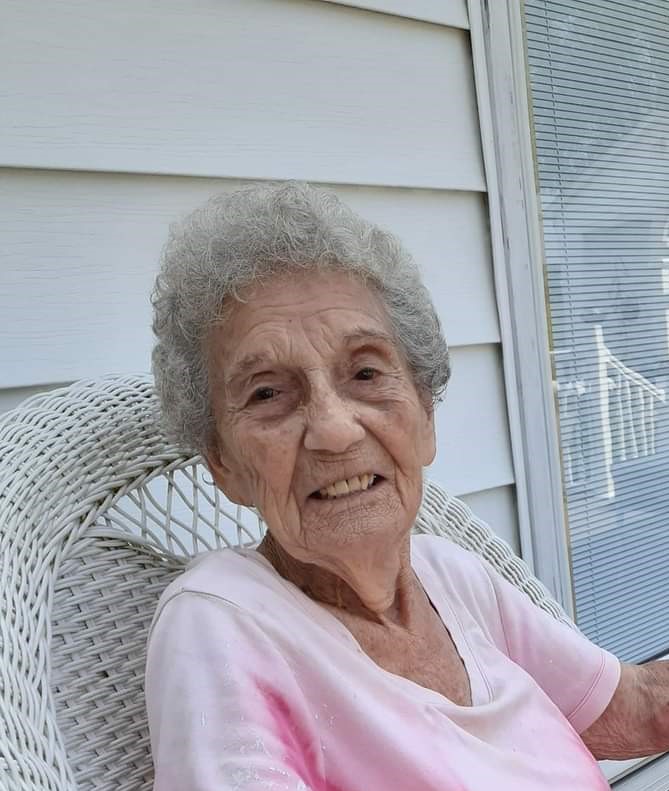 1927 - 2022
Delilah Ann Patton, 95, of Enfield passed away on Monday, December 26, 2022 at her home.  Delilah was born April 2, 1927 in New Haven to Lee Wilkerson Kennedy and Lillian Rose (Travelstead) Kennedy. She attended Ridgway and Norris City Schools. In 1946 she married Lehman Aud of Herald. From this union, they had two daughters Deanna and Deborah.  After Lehman's passing in 1978, she married Paul Flannigan of McLeansboro. Upon Paul's passing in 1987, she married Paul O. Patton of Merriville, Indiana, where they made their home until his passing in 2001.     Upon her marriage to Paul Patton, she retired from Hamilton Memorial Hospital after 35 years of employment.  She and Paul loved to travel, work on the farm tending the cattle and being with family.     Delilah is survived by her daughters, Deanna (Robert) Jaegers and Debbie (Jack) Stone both of Enfield; grandchildren, Matt (Mary) Carter of Norris City, Wesley (Brandi) Carter of Enfield and Brandon (Kim) Rose of Alamogordo, New Mexico; four great-grandchildren, Zachary Courtney) Carter of Harrisburg, Chase and Reagan Rose of New Mexico and Claira Carter of Charleston; a great great grandson, Braxton and several nieces, nephews and a host of friends.  She was preceded in death by her parents, husbands and sisters Thelma, Ruby, Marion, Beulah and Emma.    Funeral Services for Delilah Ann Patton, 95, of Enfield will be held at 12:00 p.m., Thursday, January 5, 2022 at Stendeback Funeral Home in Enfield.  Burial will be in Herald Cemetery in Herald. Visitation will be from 10:00 a.m. until service time at noon at Stendeback Funeral Home in Enfield.  In lieu of flowers, the family requests that donations be made to either the Enfield Christian Church or Ashland Christian Church and will be accepted at Stendeback Funeral Home or by mail to 609 W. Main St., Carmi, IL 62821.