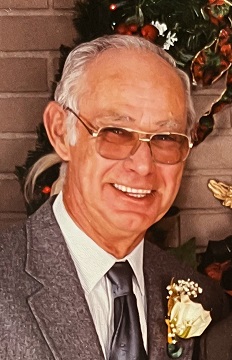 Charles Marion Griswold, 89, of Broughton, IL passed away on Saturday, August 6, 2022 at his

He is survived by his wife of nearly 70 years, a daughter, MaDonna Joan

and Ryan Schable of Kirkland, WA, and Melissa and John Potts of Montgomery, IN, seven great

Hannah Schable, and Ethan Schable. He also is survived by numerous nieces and nephews.

Charles is preceded in death by his parents, Jewel and Mary (Cantrell) Griswold, and two

Charles graduated from McLeansboro High School in 1952. He was then drafted into the United

States Army in 1953, during the Korean War, and was stationed in Fairbanks Alaska where he

served as an Equipment Engineer at the Ladd Army Airfield. Charles earned the National

Defense Service Medal and was honorably discharged in 1956. He worked for Scot

Lad/Roundy’s for over 30 years as a mechanic before retiring.

Funeral services for Charles Marion Griswold will be held at 10:00 a.m. on Thursday, August 11, 2022 at the Gholson Funeral Home in McLeansboro with Reverend Gene Garrison officiating.  Visitation will be held from 5:00 p.m. to 8:00 p.m. on Wednesday, August 10, 2022 at Gholson Funeral Home.  Interment will follow the funeral services at New Hickory Hill Cemetery near Broughton with Military Rites provided by the Marion, IL National Guard Honors Team and the Eldorado, IL V.F.W. Post 3479.